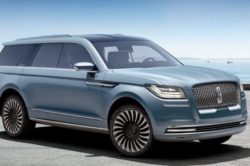 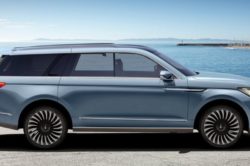 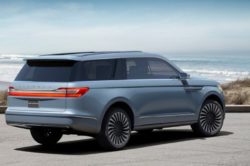 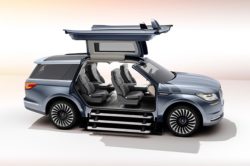 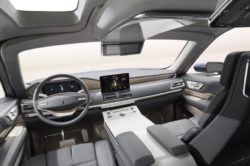 UPDATE: The 2018 Lincoln Navigator has been finally revealed, and it is a far more impressive car than first thought. For starters, it is closer in design to the original concept than many ever hoped. On top of that, it comes with considerably more gear and a more impressive powertrain than the early rumors suggested. All of these make the Navigator one of the most impressive revealings done by Lincoln in a good while.

The large crossover is still based on the same chassis as the F-150. This means it boasts a fully boxed frame and an aluminum body. However, it gets a fully independent suspension setup which will give a more comfortable ride than otherwise as well as more control over the car. The base price hasn’t been revealed, but the car is expected to cost north of $70,000 with its top end versions going for past $100,000. The latter is going to be in its Black Label premium trim level which will offer far more than the regular versions. The crossover will be released in the upcoming months, but Lincoln is already taking deposits.

The most impressive aspect about the new Navigator is its interior. It seems that the designers at Lincoln are afraid of being bold. The dashboard is quite similar to that of the concept, but it also mixes in some cues from the Continental sedan. As standard, the car gets a massive 10-inch infotainment system with dual 10-inch infotainment screens for the rear passengers. An optional 12-inch virtual instrument cluster, as well as a large head-up display, are available as optional extras. Lincoln’s highly impressive 30-way adjustable seats are available in the front. The middle and rear rows of seats get adjustable individual seats which are quite impressive, especially when considering the competition.

Not much changed over the concept and that’s great. The motorized steps, the turbine rims or the massive front grille are still there. The gull-wing doors have been replaced by conventional ones, but even so, the 2018 Lincoln Navigator is far more impressive than first though.

Here the Navigator features a 3.5 liter twin-turbo V6, an engine which was expected. However, its output wasn’t. The engine offers 450 horsepower and 500 lb-ft of torque which is considerably more than its predecessor. In fact, it is nearly the same output as that of the Raptor, and it is far more than any of its direct rivals. The engine drives either the rear or all four wheels via Ford’s highly capable ten speed automatic. This setup should give it not only great performance but also decent fuel economy on the highway which is all that matters in this class.

2016, Review / The current Navigator has been around for roughly a decade and it shows. It uses a lot of fuel despite having a modern engine, it drives like a truck and it has a designed that dates back in the early 2000s. A new 2018 Lincoln Navigator has been rumored for a while now but only recently Lincoln showcased a concept for it. Like before, it and the new 2018 Ford Expedition are going to share the same chassis and likely the same engines. This time around, though, the design will be vastly different between the two in order to be easier to differentiate. So far it seems that Lincoln might go all out and offer a much more premium SUV than before, especially with competition like the Range Rover or the Escalade.

Despite being considerably more luxurious than before, the new 2018 Lincoln Navigator might cost just as much as before. Early rumors suggested otherwise but Lincoln proved everyone wrong when they released the Continental $8,000 cheaper than the Cadillac CT6. This will more than likely be the case with the Navigator meaning it will start right around $65,000. The SUV will definitely be offered in more expensive models such as an elongated version or even a luxury edition. No matter the case, though, it will remain a body on frame SUV.

What Does This Mean?

Unlike the aluminum Range Rover, the Navigator will have a ladder frame at its core. This time around though the frame will be made out of high strength steel and its entire body will be made out of aluminum. The end result should be a lower weight by as much as 1,000 pounds. Thanks to the high strength steel chassis, the new Lincoln Navigator 2018 will also be considerably stiffer than before. On top of that, with the help of a revised suspension system which will still use an independent setup all around, the new model should be able to provide the levels of comfort found in its more expensive rivals.

How Will It Look?

Even though the 2018 Lincoln Navigator is still at least a few months away from release, with the help of the concept released a while back it is safe to assume how the end result will look. For starters, the front end will take inspiration from the newly released Continental with the same recessed grille and slim headlights. Also, instead of having the massive glasshouse found in the original, the new one will be a bit more subtle. The rear three-quarter glass will be smaller and likely shaped to give the car a sportier overall appearance.

Like most other SUVs in this class, the 2018 Lincoln Navigator will offer a lot of space for the money. As standard, it will more than likely be able to carry up to seven people with the L version being expected to be offered in four, five, seven and eight seat versions. The design will also change dramatically. For starters, this model won’t use the dashboard from an F-150 but instead, it will come with a unique design, likely with cues from the Continental. The materials should be well above the original as well, especially when considering Lincoln’s latest cars.

So far it seems that the 2018 Navigator is going to hit the market with one engine choice. Most people buy it because it is a good towing vehicle while offering the luxury found in a sedan. This means that they will not be able to offer a small 2.7 or 3-liter engine. Instead, expect the Navigator to hit the market with Ford’s new generation 3.5 liter EcoBoost. This should be able to provide close to 400 horsepower and 450 lb-ft of torque. With the help of a 10-speed automatic gearbox, a towing rating nearing 10,000 pounds should be possible.

Released in the mid of 2013 you would expect the current X5 to continue …
UPDATE Apr 24, 2017 / While there are older trucks on the market, it seems …
Honda released an all new Civic back in 2015 and since then it quickly …