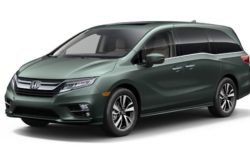 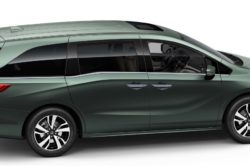 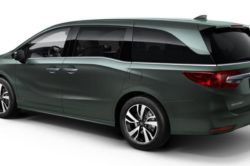 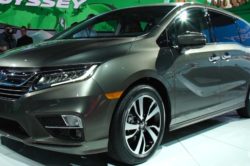 UPDATE Apr 30, 2017 / The 5th generation of the Odyssey has been revealed back in January at the North American Auto Show, and it is a brand new car. The new model is based on a revised chassis, and it is both safer and better to drive than before. The minivan received extensive upgrades inside and out in order to become the best in its class. So far it seems that the 2018 Honda Odyssey update might have achieved just that. How? Well, it has one of the best interiors on the market, and it also happens to be one of the more efficient minivans around despite the fact it lacks a hybrid model at this point.

The new model is going to become available by the end of the May, and it seems the price will still start right around $31,500. This will give Honda plenty of time to stock in on cars and also give their customers the perfect purchase experience. So far the new model received plenty of positive feedback which further reinforces the idea the new minivan is a big step-up over its predecessor.

The new Odyssey 2018 doesn’t look all that different from its predecessor, and that is good. It keeps the same glasshouse profile as before which has always been a trademark. However, in the front it gets a more modern design, standard LED headlights, a larger grille as well as a sleeker bump[er. The rear gets a slightly wider opening tailgate as well as a blacked out D-pillar which further makes it seem like a sportier vehicle. Here the awful two-screen infotainment system from the previous generation is gone on the 2018 Honda Odyssey update. In its place, they installed Honda’s brand new one screen unit which also includes a volume knob. The screen is a higher quality and the hardware behind it is definitely faster. The instrument cluster has also been replaced by an LCD screen which provides more information without being intrusive. The best part about the new Odyssey has to be the new set of Magic Slide seats. The second row of seats can slide, move from side to side and they can even be removed completely. This allows for more than ten different setups which should make everyone happy.

There is still a 3.5 liter naturally aspirated V6 here. However, this time around it makes 280 horsepower and more torque. On top of that, the six-speed automatic has been replaced by a nine-speed gearbox. Also, the top end trim levels get Honda’s newest ten-speed automatic which should improve the way it drives even more, especially with the 100 pounds weight loss.

Jul 24, 2016 Review / The Odyssey still is one of the better minivans on the market but with new competitors such as Pacifica or the Sedona, it is starting to lose ground. While many manufacturers would have problems with this, Honda is going to basically overhaul the car from the ground up. The new model will be based on the same platform as the new Pilot, it will get new engines and it will look better. However, despite all of those improvements to the upcoming 2018 Honda Odyssey, it is actually expected to cost less.

How is this possible and why Honda is making this move? Well, the new Pacifica is arguably a better minivan than the current Odyssey and it is cheaper as well. In order to compete with it, the upcoming model will have to be cheaper and on top of that, better equipped as well. These are quite hard to do on their own so Honda will definitely have a challenge on their hands. Many said that due to that, the car was going to be mildly updated only but not too long ago a model has been spied testing and from the looks of it, the new car is entirely new.

The new platform, which was developed together with Acura, is the main reason why they will be able to drop the price. On top of that, the new platform also comes with a new powertrain. This should be quite a bit more efficient, more powerful and thanks to a lighter chassis it should make the Odyssey feel faster as well. Despite that, speed hasn’t been the main reason why people bought the Odyssey. Instead, they bought it because it was smart, well equipped and safe. Luckily the new 2018 Honda Odyssey is going to be at least just as good as the previous model in these areas. As standard, it will come with all the usual safety features and driving assists. These will include lane keep assist, frontal and rear collision warning, rear cross-traffic alert, an automatic emergency distress beacon and even an adaptive cruise control system.

Test mules of the car have been spied testing ever since 2014 but only quite recently a truly new generation model has been seen. This looks to be longer, wider and lower than before. All of these will make for a better-looking minivan but this is not all. The new packaging should allow Honda to offer more interior space than before without sacrificing anything in return. Also, unlike before, some of its design features are expected to be shared with certain Acura models and some even said that an Acura Odyssey might be launched at a later date as a top of the range model.

Must Read:
2018 Jeep Grand Cherokee - Top Of the Line Model

Just like with its main rivals, the new 2018 Honda Odyssey is not going to be released just with a single engine choice. Instead, Honda is expected to offer two different versions of the car. The base model should feature an already well known 3.5 liter naturally aspirated and direct injected V6. This should be capable of delivering around 290 horsepower and close to 270 lb-ft of torque and it will send the power via a 9 speed automatic towards the front wheels. The more interesting part is the hybrid. While at this point we still don’t have a clear powertrain to be used in this model, some suggested that the car may receive a newly developed or at least updated 3.5-liter hybrid. This would be based on the technology of the Accord and while it would be capable of only around 300 horsepower, it should allow for more than 30 MPG on average, better than pretty much any of its competitors.

The tenth generation of Civic has finally arrived. In September 2015 the first member …
If we neglect Tesla, Japanese car manufacturers produce the best eco-friendly cars in the …
UPDATE: It’s been less than three years since Subaru introduced current versions of WRX …