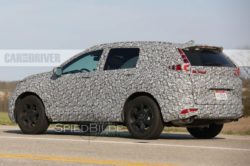 With sales of almost 350,000 units in 2015 Honda CR-V is one of the most popular vehicles coming from Japanese factories. Its sales have been growing steadily ever since it was launched in 1995, with only one minor fall in 2008 when the economic crisis began. Estimations for the following years are optimistic. Honda hopes this trend will continue and they will break the 350,000-unit barrier. So far, four different generations have been released and the fifth generation was announced in October 2016. New 2018 Honda CR-V is going to be redesigned, both inside and outside. Even the powertrain is going to be slightly modified in order to provide more power. Not much data is available, but we tried to gather all the information that has been released so far.

The CR-V stands for Compact Recreational Vehicle and it is part of the compact crossover SUV class. This class seems saturated with different models, mostly coming from Japan and North America. However, this car appears to be market’s favorite and there are no many manufacturers which can brag with such sales figures. The 2018 model will be based on Civic platform, as all other models, but it will share lots of details with Accord. The platform of the Civic has been changed thus we believe new CR-V will be based on the same redesigned platform. Apart from this, more upgrades and refreshments are expected.

The current model uses a naturally aspirated 2.4-liter four-cylinder unit which comes with an output of 185 horsepower and 181 pound-feet of torque. It is believed that the 2018 Honda CR-V is going to use the same engine but slightly redesigned. Instead of the naturally-aspirated unit a turbocharged engine should be available. This should bring more power, but figures are still unknown. Besides the 2.4-liter there will be few more options. However, Honda is keeping these details out of the record. According to one source, different units will be offered to different markets.

Reportedly, a hybrid powertrain will be part of the lineup as well. A 2.0-liter four-cylinder engine may be combined with two electric motors. However, there is a high possibility this is just a rumor. The previous models of CR-V didn’t have a hybrid under the hood and it will be big news if this comes true. Except for front-wheel drive, some trims will have an all-wheel-drive option. Allegedly, it will be mated to a six-speed manual gearbox and it is quite likely this statement is true. At this moment we can’t provide any reliable details regarding EPA rating. Every year Honda is trying to improve fuel economy thus the 2018 model might have better figures than the predecessors.

It is really hard to discuss the design of the 2018 Honda CR-V at this point, but there are some details available. As you have already read, the platform is going to be slightly redesigned but it will still share the platform with Civic. The cabin will be enlarged leading to more room for passengers. On the other hand, the trunk will be the same size as before. Inside the cabin, there are going to be plenty of multimedia elements. The new infotainment system is equipped with Android Auto and Apple Car Play. Unfortunately, this is everything for now hence please stay tuned with us since we will update this article as soon as Honda releases new information.

There are many unknown details about the 2018 Honda CR-V but the price is not one of them. Price will depend on the trim level thus range will be quite large. The base front-wheel drive is going to cost around $25,000 while the top all-wheel drive trim is estimated at $35,000. When it comes to release date many believe new model will be launched sometime in 2017.

There are many unknown details about the 2018 Honda CR-V but the price is not one of them. Price will depend on the trim level thus range will be quite large. The base front-wheel drive is going to cost around $25,000 while the top all-wheel drive trim is estimated at $35,000. When it comes to release date many believe new model will be launched sometime in 2017.