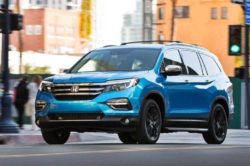 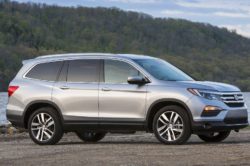 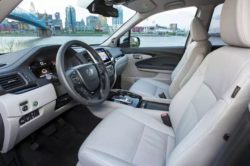 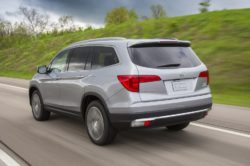 The current version of the Pilot has been launched back in 2015 and it is now a lot closer in design to its Acura counterpart than the older model. Even though it has only been released last year, rumors about a new 2018 Honda Pilot already started to float around the internet. It seems that the 2018 model is expected to be just a small refresh and not the car’s mid-life facelift which many people expected. Why this rather fast update? Well, the new CRV will be out roughly at the same time and it is safe to assume that Honda may want the two cars to be quite similar in appearance.

Its chassis will definitely stay the same and that’s a given. However, we may see a few tweaks to its running gear in order to make it a bit more compliant. The current model, while comfortable, has a vague steering feel. The new 2018 car may receive a slightly better body-roll control through better shocks. Some also suggested that Honda could offer, as an option, an air-ride system. However, we are not so sure about this as it would increase the price of the car a bit too much. We still expect the base model to cost around $31,000 with its top end versions going past $40,000.

Like we mentioned above, we are quite sure that the 2018 Honda Pilot update will be released in order to tweak its design slightly. The car’s profile and its rear end are likely going to stay the same as before. However, in the front, we may see a new grille and possibly a new set of headlights. The grille might receive a single horizontal slat, similar to what we have seen on the CRV test mule. New color options and possibly a new equipment level might also be added to the range of the Pilot. These will give people a few more customization options and it should make the car a bit more desirable.

The current model features a really good cabin with a lot of features and really comfortable seats. Due to that, the 2018 model is unlikely going to feature any major changes. The dashboard might remain the same, the seating layout is definitely going to stay while most of the equipment will be slightly updated. For starters, the infotainment system will likely be all new. On top of that, the Pilot might get slightly better materials for its top end models.

One of the best parts about the current car is its engine. While not the most powerful out there, the 3.5 liters naturally aspirated V6 is quite potent with its 280 horsepower and 262 lb-ft of torque. The 2018 Honda Pilot is very likely going to stick with the same engine considering how new it is. However, the current 6-speed automatic transmission is likely going to go. In its place, the 9-speed automatic is likely going to be offered. This is currently available, but only on the top two tier levels. This gearbox is smoother than the 6 speed and also quite a bit faster. With it, the current Pilot can hit 60 MPH in around 6 seconds which is faster than even some muscle cars like the V6 Challenger. Like before, Honda’s rather interesting torque vectoring system is likely going to still be available on the all-wheel drive model. The front wheel drive version of the car could also receive a version of this system. This might allow the car for faster cornering but it has not been confirmed so far. Some people also suggested that the Pilot could receive a new 2-liter turbocharged mill as an eco-minded option but this is highly unlikely considering the target audience.

Its chassis will definitely stay the same and that’s a given. However, we may see a few tweaks to its running gear in order to make it a bit more compliant. The current model, while comfortable, has a vague steering feel. The new 2018 car may receive a slightly better body-roll control through better shocks.

Lexus was the one that initiated whole compact luxury SUV craze close to the …
The all new Camry has been revealed back in January, and it is slated …
Back in 2013, Honda was releasing the S660 concept car which was then believed …