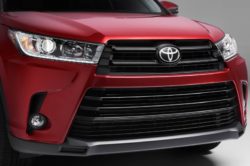 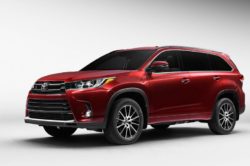 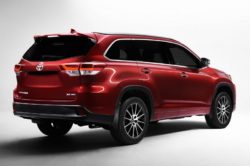 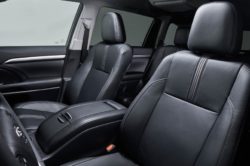 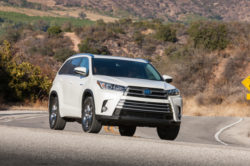 It is really difficult to tell what auto show is the most popular and most interesting. And it doesn’t only depend on the organizer, but on car manufacturers as well. This year one of the candidates for the best car show is 2016 New York Auto Show. The USA has three major shows (NY, Detroit, Las Vegas), but New York was staggering this year. Numerous cars and concepts were presented and one of them was 2017 Toyota Highlander. Although it wasn’t under the spotlight during the show, it attracted many people.

The third generation of Highlander has launched three years ago and since then sales are getting higher and higher every year. With 2017 model they are hoping to beat the last year’s record of 158,915 sold units. This is not as impossible as it seems since the new model is coming with several improvements and modifications. Toyota always tries to be innovative and to improve their vehicles. Highlander is coming in several different trim levels, such as LE, SE, and XLE. All of them are going to have similar performance thus we don’t focus on a particular trim, but we’ll about new Highlander in general.

There are no secrets when it comes to the engine. 2017 Toyota Highlander is coming with a new powertrain and there will be a hybrid variant, as well. This is not a new thing since it was launched as a hybrid for the first time several years ago. The new engine that is going to be placed under the hood is a 3.5l six-cylinder with a direct injection. Supposedly, it can deliver 290 hp and 250 lb-ft of torque. Comparing to the previous engine, power and torque have been slightly increased. Allegedly, EPA rating stands at 19/25/21 mpg, but that is yet to be confirmed.

The transmission system is also new. For the first time, Highlander is going to get an eight-speed automatic gearbox. It also uses Stop and Start Engine System. The LE trim is going to have more engine option. It is going to be a 2.4l four-cylinder that was used in the previous model. It is less powerful than the new unit and uses the front-wheel driving system. However, don’t forget about the hybrid. Hybrid is equipped with the same 3.5l V6 and comes with the four-wheel driving system. Although acceleration is not great (0-60 mph time is 8.5 seconds), it can reach 115 mph.

The third generation was launched three years ago and this is the third member of this generation. However, it will come with some upgraded features. Generally, 2017 Toyota Highlander looks more aggressive than its predecessors. Grille has been revised and it doesn’t have that large chrome trim it had last year. Limited and Platinum trim are going to have slightly different grille than other variants. Their grilles will have chrome-painted endings while all other trims are going to have a silver-painted finish. There are going to be three new color options: Toasted Walnut Pearl, Celestial Silver Metallic and Salsa Red Pearl which is going to be available only on SE.

Interior won’t be significantly modified. However, there are some new refreshments such as brown leather seats (only available on Limited and Platinum). Eight people can conveniently fit inside the cabin. Five USB ports are new. Highlander had a USB port before, but now there are going to be five of them.

The third generation was launched three years ago and this is the third member of this generation. However, it will come with some upgraded features. Generally, 2017 Toyota Highlander looks more aggressive than its predecessors.

2019 Toyota Fortuner is coming to the market in the following period. It is …
Alfa’s Giulia debuted back in June 2015 and the car has been available for …
Probably the largest problem people had with the ongoing BRZ was that it simply …