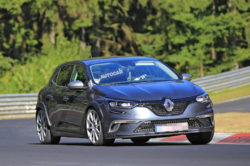 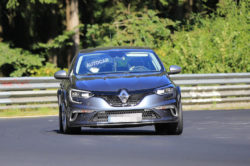 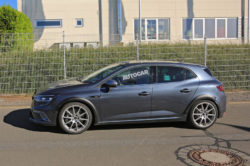 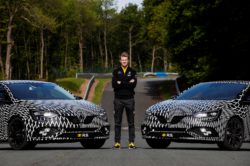 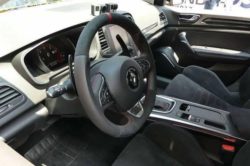 The ongoing Megane has been released back at the end of 2015, but it arrived in showrooms only a year later. So far Renault released not only the hatch but also the sedan and the wagon models of the car. With the new model, they also released a comprehensive list of trim levels but the one most were expecting is still missing. However, it seems this is going to be released with the 2018 Renault Megane update which is set to bring to the market the high-performance Renault Sport model. The upcoming Megane RS has been rumored to come with more power than its predecessor in a much more refined package. The result should be one of the most impressive cars in its class with likely one of the most powerful engines.

Its predecessor has been available only in a 3-door form, but it seems the new 2018 version of the car will only be sold as a 5-door hatchback. This means the new RS will be considerably longer than its predecessor. However, it will also be both wider and lower. This should help Renault bring the center of gravity down and give the car a more aggressive set of driving characteristics.

Even though it hasn’t been revealed just yet, the new 2018 Renault Megane RS has been seen testing. The car was covered in camouflage, but even so, we can still see a few interesting design quirks. The unusual checkered-flag fog-lamps are the same as those on the Clio RS. On top of that, the car seems to get a new grille, a completely different bumper with an integrated splitter and what seem to be more intakes. In the back, Renault will be using a center-mounted exhaust in a similar fashion to its predecessor. It seems that they won’t install a roof spoiler, but they will go with a rather aggressive diffuser. At this point, it seems the car will come equipped with 19-inch rims which are quite a bit larger than on most of its rivals. Also, both at the front and at the back the RS seems to be considerably wider than the regular Megane GT.

The predecessor of the 2018 Renault Megane RS was powered by a 2.0 liter turbocharged inline 4 with as much as 275 horsepower. Things are about to change for the new model though. For starters, it seems the new car will be powered by an Alpine-made and designed 1.8 liters turbocharged inline 4 with as much as 300 horsepower and well over 280 lb-ft of torque. This is the same engine that can be currently found in the A110. As we all know, the smaller engine is capable of quite a bit of low-end torque which is quite important in a hot-hatch. A 6-speed manual transmission will more than likely be offered as standard across the board. However, a six-speed dual-clutch transmission might also be offered for the first time in its history. This would give the car better performance, but it would take away from the enjoyment of driving it. So far it seems the car will be front wheel drive with a standard limited slip differential. An all-wheel drive system is still a real possibility, but Renault didn’t say much about those rumors.

Just like its predecessors, the 2018 Renault Megane RS is going to be mostly identical to the GT and the lesser versions. The dashboard and the layout will remain the same. However, the car will likely receive suede-upholstery, better front seats with larger side bolster as well as a new steering wheel. The instrument cluster is also likely going to be redesigned to better fit the RS-badge. We do hope a stripped down version will also be released, but this will probably happen at a later date.

Update: Ridgeline is basically chopped up Pilot, so it was always tremendously cheap to …
The new 2018 Volkswagen Polo GTI is going to feature a lot of improvements …
In 2010 the second generation of Equinox was introduced and six years later it …