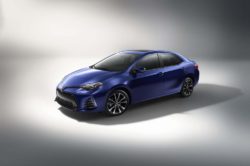 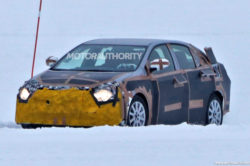 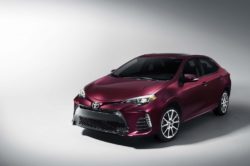 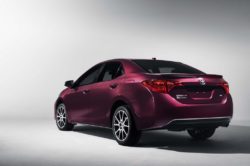 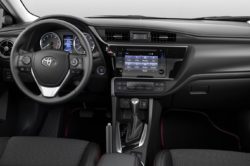 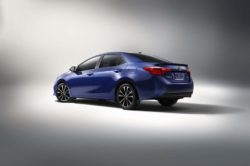 signThe ongoing Corolla has been around for a while now, but even so, it still is one of the better-selling cars in the World. To keep it rolling a brand new version is set to be released with the 2018 Toyota Corolla. At this point, there is still little official information available about the future car. Luckily though the new model has been spied testing in the Arctic not that long ago. So far it seems that the model was nothing but a test mule, but it still reveals a few very interesting things about the future car.

In detail: For starters, the new Corolla is going to be based on Toyota’s TNGA architecture. This means it will get a stiffer unibody platform and it will weigh less than its predecessor. The car is also set to offer an increased amount of features for roughly the same price as before. The model spied testing wasn’t all that different from what is currently available. However, it seemed to have a different wheelbase which was clear because the car was longer. It seemed like the rear doors were pushed forward meaning that Toyota added additional sheet-metal in order to cover up the extra wheelbase. The car doesn’t seem much larger than its predecessor, but the extra wheelbase should help it deliver more room inside the cabin.

Design: The test mule had round placeholder headlights, so it still is quite early to say much about how it will look. However, it is safe to assume Toyota won’t go on a unique path with the new model. Instead, we are positive they will use design cues found on their ongoing cars such as the Prius or even the new Camry. In the front, it will likely sport a larger intake in the bumper, and the car could get a coupe-like roof-line. The interior should offer better materials than its predecessor as well as a more modern design.

Under the hood: Most rumors suggest a BMW engine will power the 2018 Toyota Corolla. This wouldn’t be the only car to get an engine from the German manufacturer, so it might end up to be true. Instead of the usual 1.8 liters naturally aspirated engine, the Corolla could get a 1.5-liter turbo-three. This engine is known to make anything between 133 and over 180 horsepower so it would easily be able to power the lighter Corolla. A 6-speed manual is more than likely going to be used while the usual CVT will finally be gone. In its place, we should see a BMW-supplied gearbox, probably a dual-clutch unit.

Aug 17, 2016 / Toyota is coming with some great design solutions. They are not innovative only in terms of design, but also in terms of technology. No wonder why Toyota brand is the most popular car brand in the world. They put a lot of effort in improving their hybrid and electric cars. Toyota has already announced several models for 2018 and one of them is 2018 Toyota Corolla. Corolla has never been under the spotlight, but 2018 model seems to have greater popularity than its predecessors. This is our review of the upcoming model based on available info.

Corolla has passed a long way since the initial release. It was originally launched 50 years ago as a subcompact car. Production location was moving from one place to another until it finally settled in Mississippi. In 2012 the eleventh generation of Corolla was introduced and 2018 model is going to be part of this generation. This means we will not see any revolutionary modification, but the design is going to be much more attractive than before. Toyota expects higher sales figures, but we must also take competence into consideration.

2018 Toyota Corolla will be one of those cars with low power and torque, but with exceptional fuel economy. According to the first announcements, new Corolla will not have a brand-new motor. Toyota opted for a well-known unit. Under the hood, a 1.8-liter four cylinder will be placed. It delivers 132 hp and 128 lb-ft of torque. It may not seem much, but it actually delivers the goods. In addition, don’t forget the point of this hatchback is to be fuel efficient. EPA rating stands at 28 mpg in a city and 37 on the open road. However, S trim will have slightly lower figures.

There is going to be one more variant of the 1.8-liter. The second option is even better t all aspects than the base unit. It comes with an output of 140 hp and 126 lb-ft of torque while the EPA rating is rated at 30/42 mpg. These figures may vary from trim to trim, but differences shouldn’t be significant. If you wonder how this unit is so efficient you must take into consideration the fact is made from lightweight materials. All in all, the powertrain is probably the biggest advantage of the 2018 model.

If you think that this is the best design of Corolla, we share your opinion. Engineers decided to enlarge the space inside and now there is more room for every passenger. 2018 Toyota Corolla is able to accommodate five people and nobody will now complain about the narrow space. Not even those at the back. It looks luxurious on the outside as well as on the inside. Seats are optional. Thus you can choose between cloth or premium leather seats. Seat color palette is hugely comparing to the current model. Generally, the upcoming model will get a sportier look than all its predecessors, but it will still be a member of the eleventh generation.

When it comes to Toyota you shouldn’t worry about the technology. The latest devices and gadgets are going to be implemented in the 2018 Toyota Corolla. You probably didn’t hear about the Entune Audio, but this system will be used in new Corolla. It includes USB iPod integration technology. Some optional features are all-weather mats, TRD air-conditioning filter, moonroof and much more.

Considering everything that offers, 2018 Toyota Corolla is definitely worth its price. Pricing should start at $16,000 and for this amount of money, you’re getting the base equipment. For additional $8,000 you can get fully-equipped Corolla with all optional features. Reportedly, this model will be available in certain parts of the world in autumn of 2017 while it is not known when it is going to be released worldwide.

Toyota is coming with some great design solutions. They are not innovative only in terms of design, but also in terms of technology. No wonder why Toyota brand is the most popular car brand in the world. They put a lot of effort in improving their hybrid and electric cars. Toyota has already announced several models for 2018 and one of them is 2018 Toyota Corolla.

The Land Cruiser is an off-road vehicle which has been on the road for …
When it was launched in the early 2000s, the Veyron became the fastest production …
Honda released an all new Civic back in 2015 and since then it quickly …