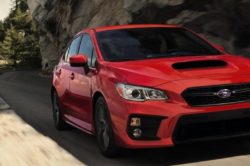 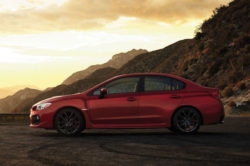 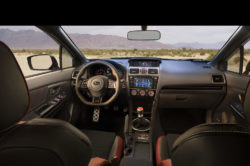 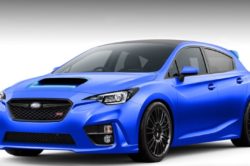 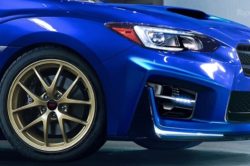 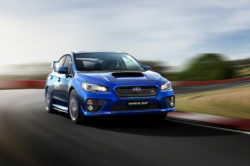 UPDATE: It’s been less than three years since Subaru introduced current versions of WRX and WRX STI to the market. That’s the main reason why these models aren’t going to get redesigned like Impreza but will get an only minor facelift and a couple of tweaks under the hood. Let’s see what’s new with WRX and 2018 Subaru WRX STI models.

First thing first. The engines stay the same. WRX will feature 2.0-liter flat-four with 268 horsepower while STI retains its 2.5-litre with 305hp. The performance gets better with new models but the fact that these engines have been around more than ten years is a little disappointing. Not to the fans of flat-four of course. The model we are more interested about, 2018 Subaru WRX STI, gets more than a few upgrades. Most importantly it now comes with updated all-wheel-drive system. STI’s central differential was previously using manual and electronic controls but now they will be fully controlled by electronics. This kind of control makes response quicker and smoother. Also, when you take a look at new STI you will notice Brembo brakes that come with two-piston calipers in the rear and six-piston up front. They are standing out due to its Day-Glo yellow color and new 19-inch wheels.

Design wise both WRX and 2018 WRX STI models got improved looks. Front bumper is slightly modified and above you will have a pair of new LED headlights. Headlights are now able to move together with the steering wheel to help better light up the curves. Opening bellow the grille have been made larger and with the blacker tone, it gave the car a new dose of aggressivity. On the inside, sound insulation is on a much better level, and noticeable is the use of high-quality materials. The more refined look of the interior was accomplished by adding the new 5.9-inch screen and an eight-way adjustable Recaro seats.

Back in the early 2000’s Subaru released the WRX on the North American market and made a big impact on the sports car industry in that moment. Soon after that, it launched STI model which was even faster than the original model. In addition, they launched even more powerful model, the turbo power all-wheel unit which is one step ahead of the STI. However, the current model of the WRX STI is a little bit outdated and it appears that Subaru finally decided to redesign this model and the biggest modification should be seen under the hood. Although there is scarce information about it there is enough to write a review. We proudly present the 2018 Subaru WRX STI with all its pros and cons.

When you look at it you might think – why does it need a redesign? But it does. For the period of twelve years, it has received only minor refreshments and it’s almost the same as it was back then. This especially refers to drivetrain which hasn’t been changed at all. This was the biggest drawback of the WRX thus Subaru finally decided to do something about it. The fifth-generation of Impreza was presented at the 2016 New York International Auto Show hence we can draw some conclusions about the STI model.

The fifth-generation of Impreza debuted in New York and 2018 Subaru WRX STI will definitely take after this model. Generally, Impreza looks more aggressive than before thus we can assume this will be the case with the STI. Headlights are C-shaped and are equipped with LED technology. The front grille will have the same shape as the original model only with an STI logo placed in the center. When it comes to size, the new one is supposed to be slightly larger than its predecessor, but the enlargement won’t be clearly visible.

Larger vehicle means more space inside. The upholstery will be made of high-quality materials and Alcantara seats will be absolutely comfortable. An 8-inch touchscreen will be placed on the dashboard. Usually, touchscreens are not larger than 6 or 7 inches in diameter thus this one is larger than average.

Customers were literally beginning for the new engine. Don’t get us wrong, a 2.5l turbo flat-four unit is a great engine. It generates 300 hp which was mind-blowing at the time it was launched. However, it is like wearing the same pair of socks for twelve years. It becomes dull after some time and you need to change them. It is the same thing with the 2.5-liter and luckily we’re going to see a new unit under the hood. New Impreza got a 2.0-liter unit with direct injection, but 2018 Subaru WRX STI might come with a far more staggering solution.

In December last year some speculations about a hybrid engine appeared. Motoring, Australian auto magazine, published an article in which states that Subaru was working on combining the 2.0-liter flat four engine with an electric motor. Reportedly, it should be paired with a dual-clutch 6-speed manual gearbox and should deliver 322 hp. Performance figures are not going to change much with 0-60 time estimated at 4.5 seconds and a top speed of 160 mph. Fuel consumption is going to be an advantage of this engine. Such combination would be able to reach 35 mpg. However, the hybrid unit hasn’t been confirmed yet and we’re waiting for the official announcements. That would be the change we surely didn’t expect.

The price of the current model is around $35,000, but with a hybrid engine, it can increase. Therefore, we should expect that the 2018 Subaru WRX STI will cost at least $5,000 more. On the other hand, if it turns out that there is no hybrid unit under the hood price won’t be increased to that extent. The release date has not been announced but it should hit the market by the end of 2017 or early 2018.

Customers were literally beginning for the new engine. Don’t get us wrong, a 2.5l turbo flat-four unit is a great engine. It generates 300 hp which was mind-blowing at the time it was launched. However, it is like wearing the same pair of socks for twelve years. It becomes dull after some time and you need to change them. It is the same thing with the 2.5-liter and luckily we’re going to see a new unit under the hood. New Impreza got a 2.0-liter unit with direct injection, but 2018 Subaru WRX STI might come with a far more staggering solution.

Lexus was the one that initiated whole compact luxury SUV craze close to the …
2018 Mitsubishi Triton – The current Triton has been released back in 2014 and …
The Tribeca was a three-row crossover offered by Subaru for nearly a decade. After …