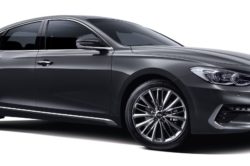 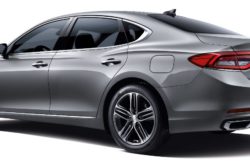 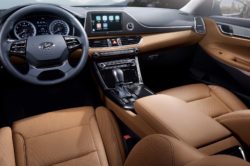 The ongoing Azera has been around since 2011, and despite its acute lack of style, it managed to sell quite well. The car has been quite a bit better than its rivals when it comes to the ride quality, and its engines have always been silky smooth. More than five years after it was released Hyundai finally released a new model with the new Grandeur. This has been revealed in Korea a short while ago, and it is going to arrive in the US as the 2018 Hyundai Azera. The car is an all-new model, and so far it seems quite impressive. Unfortunately, Hyundai didn’t reveal all that much information about it despite the fact it is scheduled to go on sale in Korea quite soon.

The ongoing version of the car is based on Hyundai’s Y6 platform which has been around for a while. It seems that the new Azera might be using their newer Y7 chassis which it would share with the Optima or the new Sonata. The new platform is stiffer than its predecessor, and it is also lighter. The center of gravity dropped as well so the car should behave considerably better than before without sacrificing the comfort of its passengers. On top of the new platform, the new Azera features a brand new interior and exterior which do make it seem like a true premium car. Even though its market availability hasn’t been announced, we are quite sure the car will still cost roughly the same as before, at least for the base models. The base versions are likely going to hover around $35,000 with the top end models going for more than $40,000.

Under the Hood – a New Engine?

We would love to see a 2018 Hyundai Azera sporting a turbocharged or twin-turbocharged V6. Unfortunately, this is highly unlikely mostly due to the car’s front wheel drive platform. Instead, we may see an improved version of the older 3.3 liters naturally aspirated V6. Despite being smaller than the V6 in its rivals, the 3.3-liter mill managed to offer 293 horsepower and 255 lb-ft of torque, all with a rather impressive throttle response. It seems that the 2018 model might get a small boost to its output. Some rumors suggest just over 300 horsepower and 260 lb-ft of torque. If this ends up to be true, then the Azera might become quite a fun car to drive, especially with the lower weight. The old six-speed automatic transmission is also likely going to be gone, and in its place, we may see an eight-speed automatic.

Even though nothing is official, it seems the 2018 Hyundai Azera might also receive a 2-liter turbo-four. It still is unclear what engines this is going to be. Many said they would just install the 245 horsepower version under its hood, but this is unlikely. Instead, we may see an engine aimed at those looking for low-end torque. This could be achieved with a direct-injected 2-liter turbo four with a variable turbocharger. The result could be in the neighborhood of 250 horsepower and north of 300 lb-ft of torque which would make the Azera a blast to drive. Like the V6, this is also likely going to use an eight-speed automatic driving either the front or all four wheels.

Design – Inside and Out

It is quite clear that the 2018 Hyundai Azera is the car that will set the tone for all of their future models. Despite keeping some of the old car’s design around, the new model manages to depart from all of their current models. In fact, we have to say that it does bring some design cues from the Genesis brand which is perfect for the car. In the front it sports a large pentagonal grille with horizontal slats, the headlights are expressive and swept back for an aggressive look while the arched hood is quite imposing. The car features a coupe-like roofline, and in the rear, it has a really short back end which makes for a design similar to rear wheel drive car. Inside the cabin, things improved quite a bit from the low driving position, wide center stack with a minimal amount of buttons or the flowing line that crosses the dashboard. The only downside might be the four-spoke steering wheel which doesn’t give the cabin justice.

We would love to see a 2018 Hyundai Azera sporting a turbocharged or twin-turbocharged V6. Unfortunately, this is highly unlikely mostly due to the car’s front wheel drive platform. Instead, we may see an improved version of the older 3.3 liters naturally aspirated V6.

UPDATE – Dec 14, 2016.  When you have tough competition like BMW and Audi …
Partnerships in the car world have become quite common in the recent years. Perhaps …
Update: Ridgeline is basically chopped up Pilot, so it was always tremendously cheap to …