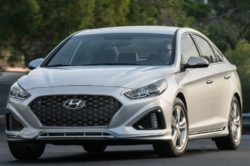 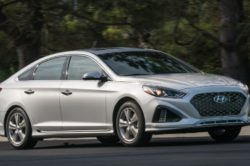 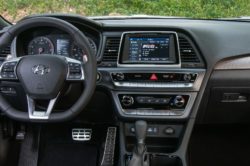 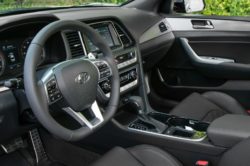 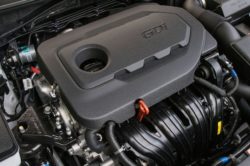 Hyundai updated the refreshed version of the Sonata a short while ago. The new model gets a new design scheme and slight changes under the skin. However, it still remains roughly the same car that was released more than three years ago. This means it still has the same drawbacks as the original which is not ideal. Even so, for the price, the 2018 Hyundai Sonata remains one of the better deals on the market. Starting at just under $23,000, the car comes with plenty of kits and a really nice looking cabin. It is also relatively efficient, and even though it may not be the most powerful car out there, it definitely is fast enough for most drivers.

The Sonata is based on Hyundai’s small to the mid-size platform, and it is a front wheel drive vehicle. Unfortunately, despite what some of the customers want, it looks like an all-wheel drive version is not going to be available anytime soon. Even so, the Sonata brings plenty other party tricks into the mix which make it well worth the money.

How could it be better?

Well, one of the biggest problems of the 2018 Hyundai Sonata remains its chassis. The car is based on a relatively old platform, so it can’t really match its rivals when it comes to the NVH levels of even safety. Luckily, Hyundai decided to make up for that with active and passive safety tech.

As standard, the Sonata gets a rear cross-traffic alert system as well as a frontal collision warning. These are otherwise optional extras on most of its rivals. Another major drawback of the car is its running gear. Even though the Sonata is one of the most comfortable cars in its class, it lacks any kind of driver involvement. The steering is dull, and the running gear is not as compliant as it should. We do hope all of these will be addressed in the near future but for now, this looks highly unlikely.

Hyundai updated the cabin of the Sonata only just enough to make it feel more special. The higher-end models get a much nicer leather-wrapped steering wheel while the aluminum inserts are of a higher quality. The center stack also changed slightly. This time around the buttons have been made out of better materials while some of the touch-based controls are gone. The infotainment system is also better than before as it now supports both Apple Car Play and Android Auto. Hyundai also added a USB plug for the rear seats which should make things much easier for the rear passengers.

Possibly the biggest change to happen to the 2018 Hyundai Sonata is its looks. Even though the car looked good, Hyundai took things a step further with this facelift. In the front, the car now features their all-new corporate look with the hexagonal honeycomb grille and the new swept-back headlights. These now feature wraparound LED DRLs while the vertical fog-lamps definitely give the car a more aggressive stance than before. The rear is mostly the same as the only real change being the tail lights. They also added new wheels for most versions which definitely go well with the rest of the design.

The 2018 Hyundai Sonata comes with the same engines as its predecessor which is definitely the norm these days. The base model gets a 2.4 liter naturally aspirated inline-four which is good for 185 horsepower and 178 lb-ft of torque. This comes mated to a six speed automatic which is barely average for its class. There is also a 1.6-liter turbo-four offering 178 horsepower and 195 lb-ft of torque. This one gets a 7-speed dual-clutch gearbox, and it is a far better engine to use. Unfortunately, it is only available on the Eco trim level which is an unusual choice for them.

The range-topping model also stuck with the 2.0-liter turbo-four engine. With 245 horsepower and 260 lb-ft of torque, this is one of the more powerful in its class. Also, the eight speed automatic gearbox is a far better choice than the other two. Unfortunately, even though the car is fast off the line, it won’t do all that great in the corners due to its aging platform.