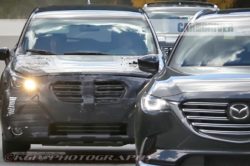 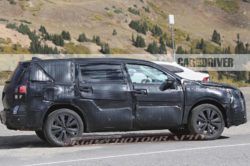 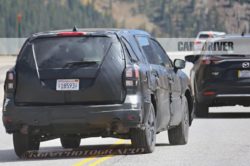 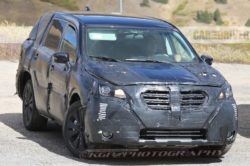 The Tribeca was a three-row crossover offered by Subaru for nearly a decade. After a failed start and a quirky design, the model became one of the better cars in its class. However, it was discontinued by Subaru a while ago after it didn’t manage to sell as good as they hoped. Now that crossovers are on a roll once again, it seems that they may release a successor. This successor has already been confirmed to be released with the 2018 Subaru Ascent. This is an all new name which will eventually become Subaru’s new top end model. The Ascent will basically be a three rows Forester, but more on that later.

The first test mules of the new Ascent 2018 have been seen in the early autumn of 2016. Since then Subaru confirmed the car and also released a concept with the Viziv-7. It seems that the production model will be heavily based on the Viziv which is a rather interesting turn of events. The car manages to depart from Subaru’s usual crossover look while starting an entirely new design scheme for their future models as well. The model is expected to be offered by the end of 2017 and its price should be in the neighborhood of $30,000. A high-performance model is highly unlikely but expects the Ascent to impress through its build quality and features.

Likely one of the most interesting aspects about the 2018 Subaru Ascent is the way it will look. So far Subaru didn’t release the official renders of the car. However, from the Viziv-7 concept and from the test mule it is safe to assume what design scheme the car will follow. For starters, it is nothing like the Forester or the old Tribeca. Instead, Subaru went for a boxier and more muscular look. The overhangs are rather short and the car is quite tall. In the front, it should boast a similar grille to that found on the Impreza while the headlights might be taken straight out of the concept. The rear is quite intriguing as well. The tail lights seem to be mounted on the body and not on the tailgate as on the concept car. On top of that, the Ascent seems to get a dual-exhaust system and a great departure angle as well.

We are quite sure at this point that the 2018 Subaru Ascent is going to feature a similar interior to the upcoming Forester. The two cars should get design cues from the Impreza such as the less cluttered and more interesting to look at the dashboard. The cars should get roughly the same instrument clusters and infotainment systems. The Ascent will feature seven standard seats and it should be able to easily accommodate seven full grown people and their luggage. The materials are expected to be above the average of its class which is expected to become one of the selling points of the car.

There have been some rumors saying that the Subaru Ascent 2018 will get a 3.6 liter naturally aspirated flat-six. However, considering where the emissions regulations are going we would not be so sure about this. Instead, we expect them to install a turbocharged 2 or 2.5-liter new generation flat-four, the same as the one in the WRX. This type of engine would easily provide over 250 horsepower and 260 lb-ft of torque while being considerably more efficient than a large flat-six naturally aspirated unit. On top of that, coupling the turbocharged engine with the lower weight of the car, the Ascent should be a blast to drive. Subaru’s already well known all wheel drive system will be standard while a CVT gearbox is likely going to be the only offering.

Kia is launching a totally new vehicle! It was spotted on the streets in …
After back in April the first development mules of VW’s new B-segment SUV has …
The RS3 is not a new car and it has been the top of …