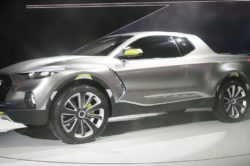 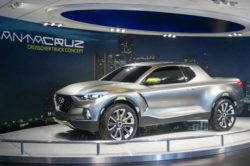 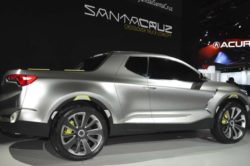 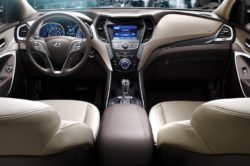 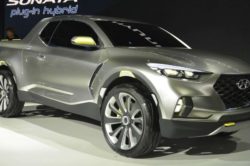 The most interesting fact about the 2019 Hyundai Santa Cruz crossover truck concept is that Hyundai said that besides the diesel version showcased at the Auto Show, another option was also in the works. This is interesting because concept cars never come with engine choices which really means that they are really thinking to put it into production. While the diesel is unlikely going to be offered on the US market anytime soon, the car will very likely come with two petrol offerings as standard with a possible diesel version coming sometime in 2023 or 2023.

The base model of the truck is expected to use a tiny 1.6 liter turbocharged inline 4 petrol engine which could make up to 200 horsepower and 190 lb-ft of torque, more than enough for the urban family. Further up the range, a 2-liter turbocharged petrol engine with more than 250 horsepower might become available which will make the Santa Cruz a really interesting car. All wheel drive should be available as an option with all engines while an automatic transmission will be available even on the base trim level.

Design-wise, the car is really interesting, to say the least. While it does look like a truck with a rear bed and a high stance, it also takes inspiration from Hyundai’s crossover and hot hatchbacks so it really offers something different with flared wheel arches, large alloy wheels wrapped in high-performance street tires and a really aggressive design scheme. The front end gets four individual LED clusters, a large hexagonal honeycomb grille, and a really sleek bumper, the cabin is using large coupe-like doors and smaller rear “suicide” doors while the bed is nicely integrated into the design.

The production model will likely only feature normal doors as well as a slightly more toned down look but the general idea is most definitely going to be kept. The interior of the 2019 Hyundai Santa Cruz crossover truck concept, on the other hand,  will most likely not be used on the production model. Instead, we expect a fresh and young-looking interior that will be aimed mostly at the younger generation of buyers with a lot of entertainment features and easy to clean materials.

2019 Toyota Fortuner is coming to the market in the following period. It is …
The Land Cruiser is an off-road vehicle which has been on the road for …
The 86 is a two-door back-to-basics sports car that Toyota released nearly five years …