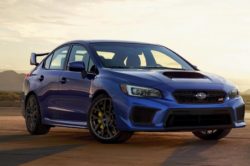 WHAT’S NEW? Jul 17, 2017 After plenty of rumors about a new high-performance sedan, it seems the next generation Subaru WRX is not expected until 2023. Subaru went ahead and said the WRX and WRX STI range of cars are standalone models that are not closely related to the Impreza. Because of that, they have their development cycle, and it looks like a new version will be released with the future 2023 Subaru WRX. As expected, the new model is eventually going to be based on Subaru’s latest modular platform, and it will come with the latest bells and whistles.

However, until then the WRX is actually going to remain mostly unchanged. It looks like it may receive a couple of limited edition models by the end of its lifetime. However, this is likely the only thing the car will receive.

At this point, the WRX doesn’t really have a suitable competitor on the market. There are similarly priced hot-hatchbacks, but these do not offer what the WRX has to give. The car is usually better to drive than most of them, and its engine is currently the only one of its kind on the market. However, the car is let down by its interior, and its exterior design is not much better either. To change that the 2023 Subaru WRX is expected to be fully redesigned. Thanks to the revised platform the car will be lighter, more rigid and as a result, much better to drive. In fact, Subaru may get ahead of their rivals in which case we can only expect great things from the future.

The upcoming 2023 WRX is more than likely going to be based on the upcoming facelift of the Impreza. Even though Subaru said these are standalone models, we don’t see them change everything about the car. Instead, the WRX will boast a more muscular design than the Impreza. This will be achieved with the help of flared wheel arches, larger wheels, better brakes, possibly a hood-scoop and even a large wing on the trunk. These will allow them to maintain the WRX’s main selling point, its flamboyance. People all over the world prefer it over hatchbacks not just because it is faster but it also looks a lot more unique.

Must Read:
How Have Cars Changed Over The Years?

The interior, on the other hand, is expected to be vastly improved over its predecessor. The car is likely going to boast the new dashboard design currently found on the Impreza. However, it should receive more supportive seats, possibly a digital instrument cluster as well as a nicer steering wheel. Over the ongoing model, the new 2023 Subaru WRX should feel like a much more premium product, and that will actually not be that hard to achieve all things considered.

So far the WRX has been powered by a turbocharged engine, and it always had all wheel drive. Luckily it looks like this is not going to change anytime soon. It seems that the revision of the WRX, despite being more than three years away at this point, will stick with a turbocharged flat-four engine. This might be a revised version of the current FA unit, and it will likely remain a 2.0-liter mill. This should be able to deliver closer to 300 horsepower and likely over 270 lb-ft of torque. A 6-speed manual is expected which would be a major step over the old five-speed gearbox. This would allow the new WRX to be not only faster but also more fun to drive. A standard all wheel drive system with a torque vectoring feature will also be offered which should make the WRX one of the fastest cars in its price range.

The future of the motor industry is a hugely hot topic at the minute. …
NEWS/ Jul 5, 2017 / The Forester is one of the best-selling crossovers in Canada as …
Not that long ago Subaru showcased the WRX and WRX STI for the 2018 …