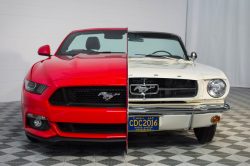 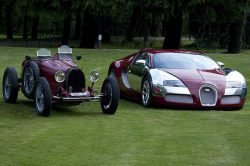 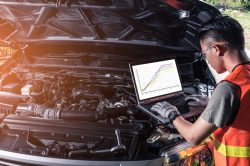 The future of the motor industry is a hugely hot topic at the minute. With hybrid and electric vehicles being at the forefront of the battle against global warming and an emissions crisis. The world’s leading brands have come together in force to offer the same great cars, without the need for fossil fuels that cause serious harm to our environments on the whole.

What is also interesting to look at though, is how far the industry has come to get to this point. It is well documented that the invention and use of new technologies have grown exponentially over the past 100 years, and a graph would show a huge increase in the gradient at which growth has occurred year on year. With the first production vehicle launched by Ford in 1908, how far have we come in terms of what vehicles can give to their user?

Performance, design and (more so in recent years) tech have enabled us to have evermore comfortable drives around the world, and yet we still strive for more.

As the technology that allows us to operate machinery and develop the engineering required to build performance-minded vehicles has gotten better, so have the results that follow. If we jump forward to the 1950s the average speed of vehicles being sold in America was just 13.2 mpg, a disappointing figure if you were considering purchasing a new car in the modern era.

When the ’70s came around, an oil price shock meant the world had to take note. As the cost of fueling vehicles had multiplied by such a vast amount, it meant that performance had to improve. People needed their vehicles to use the oil required in a pocket-friendly way. American Congress passed a law that doubled passenger vehicle efficiency to 27.5 mpg within ten years of 1975. Much to the appreciation of drivers at the time, manufacturers followed suit and cars in 1985 had an average mpg of 27.5.

In 2023, in a test of over 800 vehicles readily available on the global market the average speed for petrol cars is 36 mpg and diesel cars is 43 mpg. In contrast, the average UK all-electric car gets a whopping 132 MPGe.

Since its inception in 1903, registration plates have seen a vast amount of change. Back in the beginning, their sole purpose was to act as an identifier. A way to tell the difference between one vehicle and the next, each was given a unique registration. The very first style/format is now referred to as ‘dateless’. This was a regional identifier in the format of a collection of letters, followed by a random number between 1 and 4 digits in length.

In 1963, the combinations for new registrations had reached its limit, meaning a new format had to be created. The suffix plates that followed had the same regional identifiers, random digits, then an age identifier in the form a final letter. Each year from 1963 had a corresponding letter representing that year, with ‘I’, ‘O’, ‘Q’ ‘U’ and ‘Z’ not being used. In 1983 number plates changed again. The registration was flipped, and the age identifier led the format, with the regional identifiers being at the very end. The same letters remained unused.

It was in 2001 that we saw the development of the latest number plate format. But that isn’t the only thing that has changed. The industry had given birth to a new sector, replacement number plates (you can check more on this here: number1plates.com). This is a place in which customers are able to alter the styling and design of their registrations within certain regulations in order to give more of a unique feel.

The design and ergonomics of vehicles in the modern era have largely been determined by performance and comfort factors expected by the consumers in the market. With the average car in the UK in 2023 costing around the same as the average yearly salary expectations are high. These individuals want as much as possible in return for their vast investment, and understandable so.

As you would expect then, styles have also changed through the demand of the consumer. If you compared the Ford Model-T from 1908 to the Fiat 500e of today, there is barely any resemblance at all. In the early years, size and durability was a factor. Without flat road surfaces, and a huge engine to carry around, the compact hatchback of today wasn’t an option. This is why many vehicles were carriage-like in appearance.

The uneven road surface and harsh driving conditions did mean though that the rigid body and chassis had to be developed to give a smoother ride. The most luxurious cars today boast about their seamless rides and impressive suspensions, so the demand for a comfortable drive remains as strong as ever.

Technology on the interior of consumer vehicles is something that has only really been around for the past 20 years. As with a vast array of industries, the internet has allowed technology to grow into every area and create solutions for problems that we never really knew that we had. Satellite navigation and in-car wifi would have never been required in 1970 when the main issue was improving the 13 mpg efficiency.

Nowadays, self-driving vehicles are the latest flavor and demand for it is (wearily) growing. Some similar tech has been added to vehicles. With lane recognition and cruise-control crossed with automatic braking, an almost autonomous world has been built already. Google has a self-driving development sector to their business, and they have recently announced $2.25 billion in funding for their latest expedition (with even more being expected to be raised).

One of the issues surrounding the topic is the safety of such a vehicle. Advocates argue though that removing the human-error and judgment from difficult situations will significantly improve driver safety and reduce the number of incidents on the roads. Google’s initiative, called Waymo, launched in 2009, 11 years on closer though they may be, there is a long road ahead until we are manning fully autonomous cars.

WHAT’S NEW? Jul 17, 2017 After plenty of rumors about a new high-performance sedan, it seems …
People who love cars enjoy having various items that show that passion. It is …
2020 Ford Bronco- Again under the spotlight, O.J.’s fault, again… We have all been …