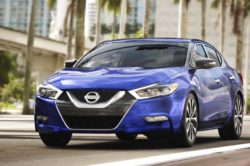 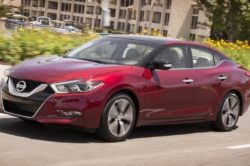 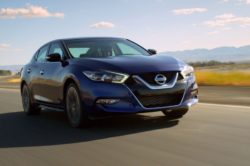 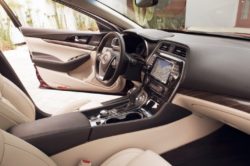 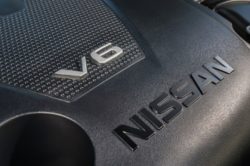 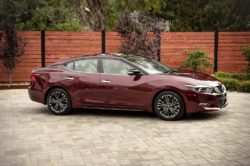 We just love Nissan! And if you are a regular visitor of our blog you probably noticed that. They say don’t judge a book by its cover, but the design of its cars is just staggering. Okay, we must admit that engines are not top-notch and they can have better acceleration. However, no one can stay indifferent when looking at their vehicles. One of those mind-blowing cars is 2017 Nissan Maxima. The latest generation of Maxima brought several significant changes and it was released as a full-size compact car. But let’s first take a look how it was developing through decades.

Maxima debuted in 1981 as a compact car and it was named Datsun Maxima at the time. Throughout the years it has evolved from a compact over a mid-size to a full-size car. The eight generation debuted last year and it is based on the Nissan D platform. The very first glimpse of this four-door sedan was caught during Super Bowl ad and the Japanese automaker released two photos following the ad. It was officially presented at the 2015 New York Auto Show it came in five different trim levels and nine exterior color choices. This generation is 82lbs lighter than the previous one which significantly influences its performance.

When it comes to the exterior of the 2017 Nissan Maxima nothing is going to be changed except there are new packages. There are two new packages: Dynamic Package and Medallion Package. The Dynamic Package includes new side rocker molding, 18-inch alloy wheel, and a premium spoiler. On the other hand, the Medallion Package brings exterior ground lighting, 18-inch alloy wheels, and a premium spoiler. For a comparison, the Midnight Edition, a package introduced last year, comes with a rear diffuser, sports spoiler, and 19-inch black aluminum-alloy wheelbase.

Inside the cabin, there won’t be huge modifications. It is expected that Apple Car Play will be available for all trims and new packages will bring some refreshments to the interior as well. However, the biggest refreshment these packages are bringing is illuminated kick plates. Everything else should remain exactly the same as before.

The 2017 Nissan Maxima will have the same engine under the hood as its predecessor, but its performance will be enhanced. A 3.5-liter six-cylinder is going to come consisted of 60% new parts, according to reliable sources. Power and torque won’t be changed much, but there is a significant improvement in fuel efficiency. It comes with an output of 300 hp and 261 lb-ft of torque which is for 10 hp more than last year. The previous model had a decent EPA rating which stood at 19 mpg in a city and 26 mpg on the highway. The upcoming model’s fuel efficiency is estimated at 22 and 30 mpg, in a city and on highway respectively.

Top speed is believed to be 135 mph while 0-60 mph is estimated at 6.3 seconds. If you compare these figures and engine to the competence on the market you’ll see that new Maxima is above the average. For instance, it has 30 hp more than Avalon, but it is almost on a level with Impala. The engine appears to be flawless. However, the front-wheel drive will remain the only available option and we’re still looking forward to seeing the all-wheel drive. We had really high hopes AWD would be available with new Maxima they let us down.

Prices will go neither up nor down. Each trim level of the 2017 Nissan Maxima will have its own special price. Therefore, the base model costs $32,410 while the top trim is estimated at $39,860. If you want to add a special package to your Maxima, you will need to add few dollars more to these prices, but it still unclear what will be the prices of these new packages.

At the start of 2016 the all new 2017 GMC Acadia has been launched, …
Hyundai entered the market of luxurious vehicles a while ago. Their debut wasn’t very …
Probably the largest problem people had with the ongoing BRZ was that it simply …