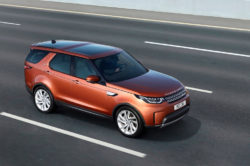 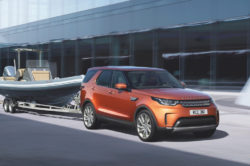 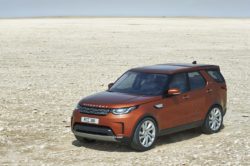 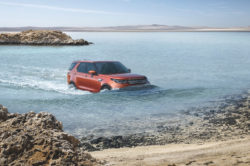 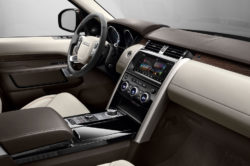 Land Rover has been well known for making great off-road machines that also did quite well on the road. However, this changed in the past few years with their crossovers becoming a lot more focused on road use. The Discovery, or the LR4 in North America, was one of the last true off-road oriented models. This changed a few weeks ago when at the Paris Auto Show the 2018 Land Rover Discovery has been released. The car has nothing in common with the older models and that is both good and bad. The new Discovery is lighter, faster and a lot more fuel efficient than before.

This model is also the first in more than a decade to be based on an entirely new chassis. The previous LR4 was actually based on the older LR3 and both of them had a really old integrated chassis which was heavy and not that great on the road. The new model, on the other hand, shares its D7u platform with the Range Rover. This is an all aluminum unibody design which allowed them to shave more than 1,000 pounds of weight from the car. This means that the new Discovery is actually one of the lighter cars in its class which is very impressive.

The model will be sold in Europe starting with the first quarter of 2017 while in the US it is expected slightly later. Its price has yet to be announced at this point but it shouldn’t stray too far from the older model. For the UK market, Land Rover will be making a limited edition model in just 600 units which will cost nearly £70,000.

Probably the largest visible change is the way the new 2018 Land Rover Discovery looks. All four previous versions used a boxy shape which was left pretty much unchanged since it was released. The new model is nothing like that. It now looks a lot more like a slightly bigger version of the Discovery Sport. The front end has exactly the same type of headlights and grille which are angled and swept towards the back for an aggressive look. The roof, while tall, gives the impression of floating on blacked out A, B and D pillars with the C-pillars being separated by a black line as well. Also, the car’s black plastic inserts on the sides give it a much tougher look than that of the Sports mode.

It is safe to say that there are influences from both the older model and from the new Range Rover. The 2018 Land Rover Discovery now gets a much more premium-looking cabin. The dashboard is very similar to its more expensive siblings. It gets new air vents, a larger infotainment screen, the same climate controls found in the Range Rover as well as a very similar instrument cluster and steering wheel. The materials are also very impressive for the price and there is noticeably more room than in the more expensive Range Rover.

The new Discovery now gets pretty much the same engines that are found in the mid-range cars in the Jaguar/Land Rover’s roster. The base model will come with a 3 liter supercharged V6 petrol engine offering 340 horsepower and 332 lb-ft of torque. The European model, and possibly the US model as well, will receive a 3 liter turbocharged V6 diesel with 255 horsepower and 443 lb-ft of torque. Some markets are also going to receive a base model with a 2 liter Ingenium diesel. This will only offer 237 horsepower and 369 lb-ft of torque. The good part is that all versions will get an eight-speed automatic and the same all-wheel-drive system found on the Range Rover.