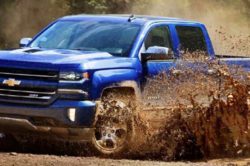 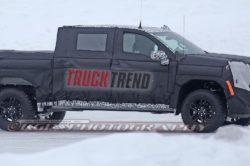 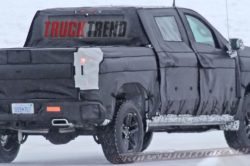 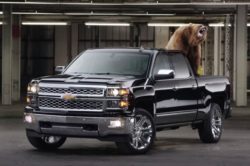 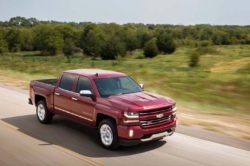 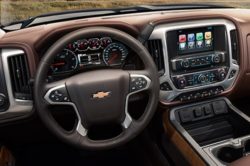 UPDATE Apr 24, 2017 / While there are older trucks on the market, it seems that GM is looking to replace their Silverado. It seems that their goal is to become the best selling truck manufacturer in the US and in order to do that they have to dethrone Ford. Even though the current version of the truck is good, it can’t really match its main rival. This is going to change though because not that long ago the first prototype for the 2018 Chevrolet Silverado update has been seen. The camouflaged truck was wearing badges from competing manufacturers but only to cheat photographers. It seems that GM has pretty much completed the development of the upcoming model.

So far General Motors has been quite criticizing to Ford’s aluminum-bodied trucks. However, this doesn’t mean that they won’t use aluminum. In fact, we are pretty much certain that the new Silverado will be an aluminum-bodied truck. Chevrolet has been working for a while in order to develop a better aluminum than that on its competitor. The Silverado is expected to shed north of 400 pounds from its total weight. On top of that, the new aluminum used to its body should be able to better mitigate accident damage and also be more durable in the case of a small bump. Both of these have been rather large problems with its rival. Even though it will be using aluminum, the price is not expected to increase much. In fact, the base model is still more than likely going to cost under $30,000. The 2018 Chevrolet Silverado update is expected to be showcased in early 2018, and it should hit the market in the summer of the same year.

The camouflaged prototypes of the 2018 Silverado give us a good idea about the overall look. It definitely seems slimmer and taller than its predecessor. The truck also seems to be wider and have a larger cabin than before. In the front, the new model has a massive grille, new quad headlights, similar to those of the previous generation as well as a more aerodynamic front end with a slanted grille. In the bumper, the truck houses its two rectangular fog lamps mounted on the edge of a large grille that could be an intercooler air intake. The sides of the truck are not as boxy as on the current model. In fact, the truck seems much rounder than before which is a clear departure from the outgoing model.

Thanks to the larger cabin the 2018 Chevrolet Silverado update will definitely be able to provide more room inside. This will be especially obvious in the CrewCab models which are expected to provide larger rear seats than before. The other versions will still benefit from more leg and headroom as well as more storage space. The entire dashboard is going to be redesigned, and some even suggested that a digital instrument cluster might be offered with this model. The truck will come with Apple CarPlay and Android Auto on all versions equipped with an infotainment system. The materials are also expected to improve considerably, especially on the higher end trim levels which always lacked in comparison to its rivals.

Here the 2018 Silverado is likely going to boast an improved set of engines. The base 4.3 liters naturally aspirated V6 is likely going to stick around for a while. This will receive port and direct fuel injection which will increase the output and provide better fuel efficiency. A turbocharged inline 4 with close to 300 horsepower is also a real possibility. The large V8 engines such as the 5.3 and 6.2-liter versions might stick around for a couple more years. All of them will be coupled with GM’s new ten-speed automatic and either the rear or all four wheels.

Sep 19, 2016 / Review It is hard to tell whether mid-size pickup truck market is saturated or not. There are numerous different manufacturers and even more pickups out there. This is good for potential customers since they have a wide variety of choice, but it may not be so good for companies. Economic laws tell us – bigger offer, lesser price. Therefore they need to reduce production costs or to be satisfied with lower profit. This field of the market is especially saturated in the US due to a large number of pickup truck manufacturers. Chevrolet is one of them and it even announced an upgraded truck for 2018.

Although Chevrolet didn’t set the date, in our opinion 2018 Chevrolet Silverado should be launched sometime next year. Perhaps, it might be presented at the 2018 Geneva Auto Show which is always held around New Year. Silverado is not for those who are on a tight budget. Its price may even reach $50,000 which is around average, but it’s a lot in general. We are asking you for your patience and to stay tuned with us in order to find out more.

Unfortunately, even though Ford announced the new pickup truck there are no many reliable details regarding characteristics. Therefore we based this review mostly on rumors and we even draw some conclusions by ourselves. It is inevitable to see that new Silverado will come with some refreshments and improvements. This model may be the first representative of the next generation, at least according to some sources. This means it may get a new powertrain and there are already some speculations what is going to be under the hood. There are no many details and speculations about design, but we have managed to get some info about the engines.

There are many possible solutions for the engine, but we’ll consider only the most probable ones. The best choice should be a 5.3l unit which has already been used in several Ford’s and Ram’s trucks. This means that we already know its output and performance. According to the official website this unit generates 355 horsepower and 383 lb-ft of torque. If this is used under the hood of the 2018 Chevrolet Silverado then it will probably be mated to 6-speed automatic gearbox and will come with the four-wheel driving system.

On the other hand, some speculations suggest that a 2.7l twin-turbocharged six-cylinder will complete the lineup. This unit delivers around 325 horsepower. Estimated 0-60 mph time for these two engines is around 6.5 seconds. Apart from these two units, there are rumors about three more possible solutions. However, we believe these two are very likely to be found under the hood of the upcoming Silverado. We’re still waiting for the official confirmation and can’t wait to see the EPA rating. Fuel consumption is a sensitive issue when it comes to pickup trucks and in our assumption, 2018 Chevrolet Silverado will be as efficient as the previous model.

It is much easier to discuss the engine lineup than about design. Chevy didn’t release any info about the exterior and interior and even rumors about them are scarce. If this truck appears to be the next generation model then it is going to have some important changes. We can only say that Chevy Silverado 2018 will definitely look elegant and modern. Perhaps it is going to get new lines on sides and a slightly different bonnet, but generally, it will take after its predecessor.

According to some websites, cabin won’t be modified. It should stay exactly the same as before. However, we can expect some minor tech updates. Everything else is going to remain untouched, but don’t take this to the bank and please wait for the official information.

It is hard to tell whether mid-size pickup truck market is saturated or not. There are numerous different manufacturers and even more pickups out there. This is good for potential customers since they have a wide variety of choice, but it may not be so good for companies.

We must admit that we usually write about cars made by American and Japanese …
It is not a secret that we love Hilux. If you are a regular …
2018 Ford Taurus – The Taurus is Ford’s full-size offering which has been around …