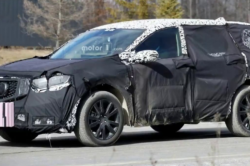 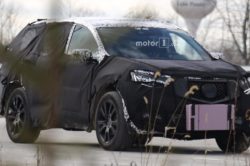 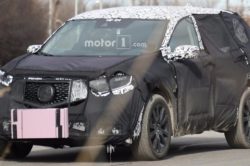 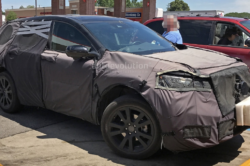 Acura released the ongoing RDX back in 2012 and refreshed it back in 2016 with a slightly more up to date design. The car is still based on the same platform as the older CRV, and it features older technology than most of Honda’s current vehicles. Because of that, they are going to release a new model in the near future. So far the details about this are still scarce, but it looks like the car may be released with the future 2019 Acura RDX. Just like with the CRV, the RDX is going to be based on Honda’s all-new modular architecture. This also underpins the new Civic, and it is a huge step over its predecessor. The new platform uses more ultra-high and high strength steel, so it is capable of offering far better NVH levels than before. Also, thanks to the increased structural rigidity the car should be quite a bit better to drive and more comfortable as well.

Weighing in at over 3,700 pounds, the current RDX is not really the heaviest car in its class. Even so, with the help of the new architecture, rumors say the future vehicle will drop north of 150 pounds which will definitely be noticeable, especially on the all wheel drive model. From the spy shots we have seen so far it looks like the new car will also feature a longer wheelbase as well as a wider track. Most other details have been very well hidden, but even so, we can clearly see that the car is lower as well. This is an interesting move, especially for a crossover, but more on that later.

Probably one of the biggest drawbacks of the current model is the cabin. Even though the materials and the driving position are on par with its rivals, the features aren’t. The dual-screen infotainment system is really slow to respond and not that great to use. Also, the instrument cluster looks old, and the plastics on the lower part of the dashboard feel quite cheap too. Well, all of this will change with the 2019 Acura RDX. Considering the latest turn of events, it is safe to assume the car will share some cues with the Civic. We can expect a far more minimalist-looking dashboard, fewer buttons, and a new infotainment system. This will use a single screen, and it should support touch-based controls. However, it looks like Acura may also offer a swivel-wheel to control it in order to make the driver’s experience so much nicer.

Even though it is based on the CRV, the RDX never really looked like a Honda. Well, we are glad to say things won’t change for the future 2019 Acura RDX. From the spy shots we have seen so far it looks like the new model will look a lot more like an evolution of the current car. In the front, we can clearly see Acura’s all-new corporate design scheme. The headlights are mounted higher, and they feature a more aggressive rake while the bumper definitely features larger intakes than before. It looked from the side it seems like the new RDX will feature a slightly raked roof which suggests a sportier appearance.

So far the car has been available with a 3.5 liter naturally aspirated V6 which pleased most of its buyers. However, Honda will soon discontinue this engine, so the 2019 Acura RDX will have to use a different one. Luckily enough, an inside source actually confirmed that the RDX will receive Honda’s all-new 2.0-liter turbo-four engine. This has been first released on the Type R Civic, and since then it quickly became a favorite among customers. The version that will power the RDX will be quite a bit more different than what we are used to. For starters, this particular model will have to offer more torque at lower RPM. Because of that, we can safely assume the one in the RDX will provide around 250 to 260 horsepower and close to 300 lb-ft of torque. The car will likely come with a ten speed automatic and front wheel drive as standard. All-wheel drive and probably an all-wheel steering system should be offered as optional extras across the range.

2019 Ford Edge– Edgier? Does Ford need an Edge, when it has an Explorer? …
Electric cars were science-fiction just ten years ago and now we already have them …
The Ranger has been released a while ago, and the plan was also to …