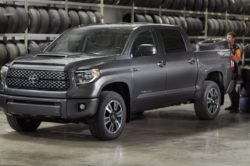 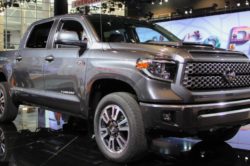 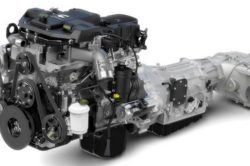 UPDATE Apr 25, 2017 / The ongoing Tundra has been around for more than a decade at this point. Despite that, it still sells quite well thanks to all the upgrades it received. Not too long ago the brand new 2018 Toyota Tundra update has been revealed, and this includes an all new version. The TRD Sport is set to be released as a lesser version of the TRD Pro. The truck boasts all the exterior and interior upgrades but with a milder running gear. Even so, it should be more than capable for most people while on the road it will likely be better than its more expensive counterpart.

So far Toyota hasn’t revealed the price for the TRD Sport. Despite that, the truck is set to cost less than the equivalent TRD Pro and more than the SR5, so right between $34,500 and $44,000. Considering it will be available in CrewMax and Double Cab configurations, it is safe to assume it will start at little over $35,000. At this price, the TRD Sport is going to be one of the most comprehensive performance packages, and we don’t see it failing. The truck is more than likely going to be available in showrooms later this summer when the entire range of the revised Tundra will be shown.

Design – Inside and Out

The 2018 Toyota Tundra update boasts some significant changes over its predecessor. For starters, it received a brand new front end. This now includes a billet aluminum grille with a honeycomb mesh, LED headlights, DRLs, and fog lamps as well as a new bumper. The hood also boasts a large hood scoop which does give it a mean look. Toyota also added 20-inch lightweight alloy wheels wrapped in all-season tires as well as a TRD Sport graphic on the bedside. Inside the cabin, it is now available with a new safety package which includes things such as adaptive cruise control, lane departure warning, and even a pre-collision system.

The 2018 TRD Sport is only going to be available with Toyota’s already well known 5.7 liters naturally aspirated V8. This will provide 381 horsepower and little over 400 lb-ft of torque sent through a six-speed automatic to the rear or all four wheels. In order to improve the performance, they also added a new set of Bilstein shocks, which are also available as an aftermarket upgrade to the regular Tundra, and larger anti-roll bars in the front and at the back. These will improve the way it drives on the road by quite a bit, and with them, the Tundra TRD Sport is set to become one of the better trucks for on-road use. 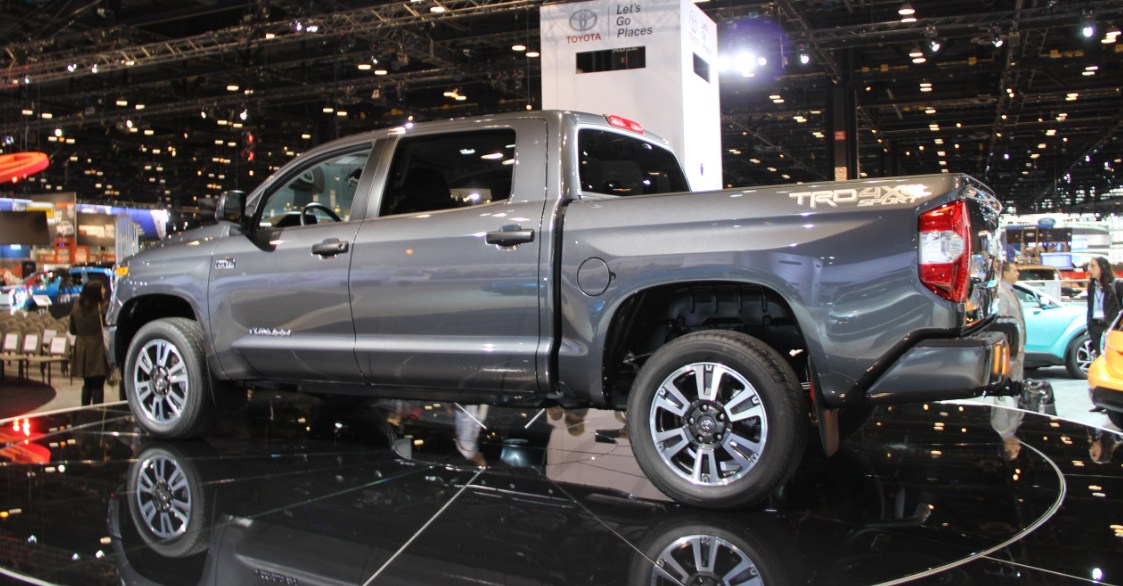 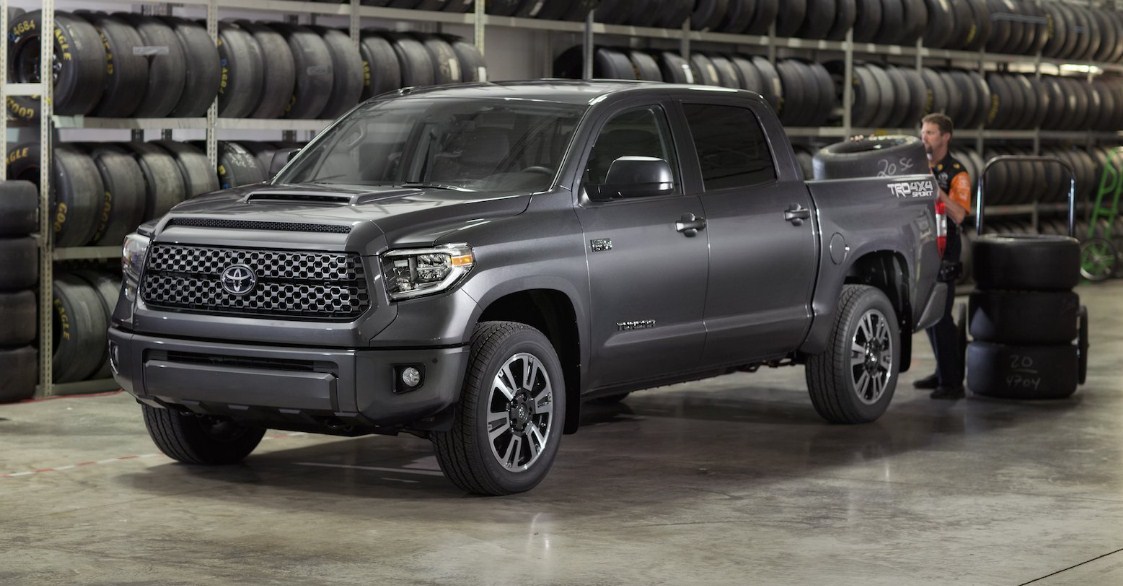 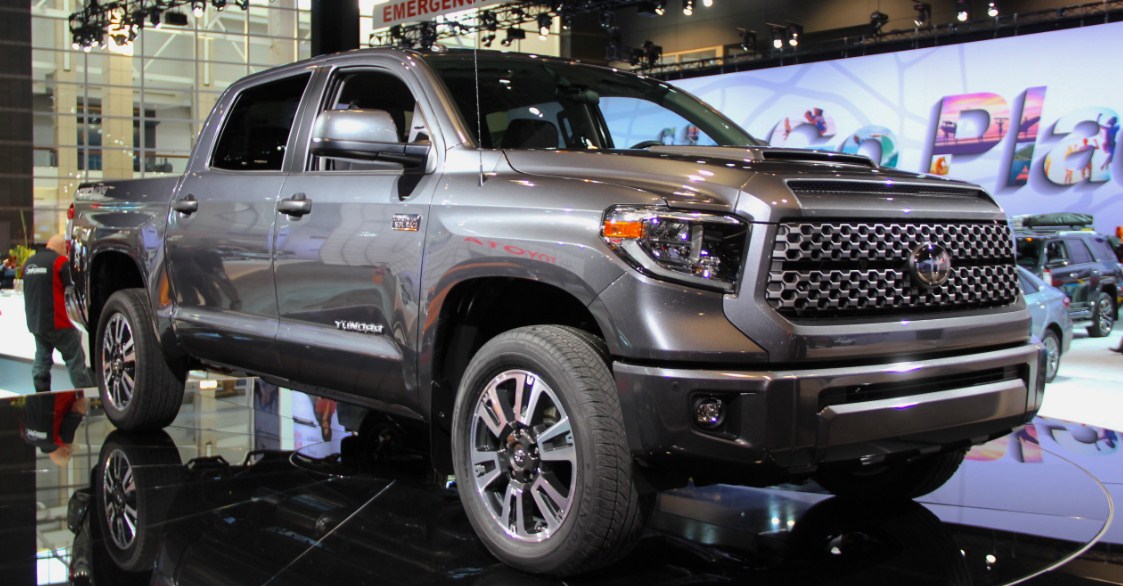 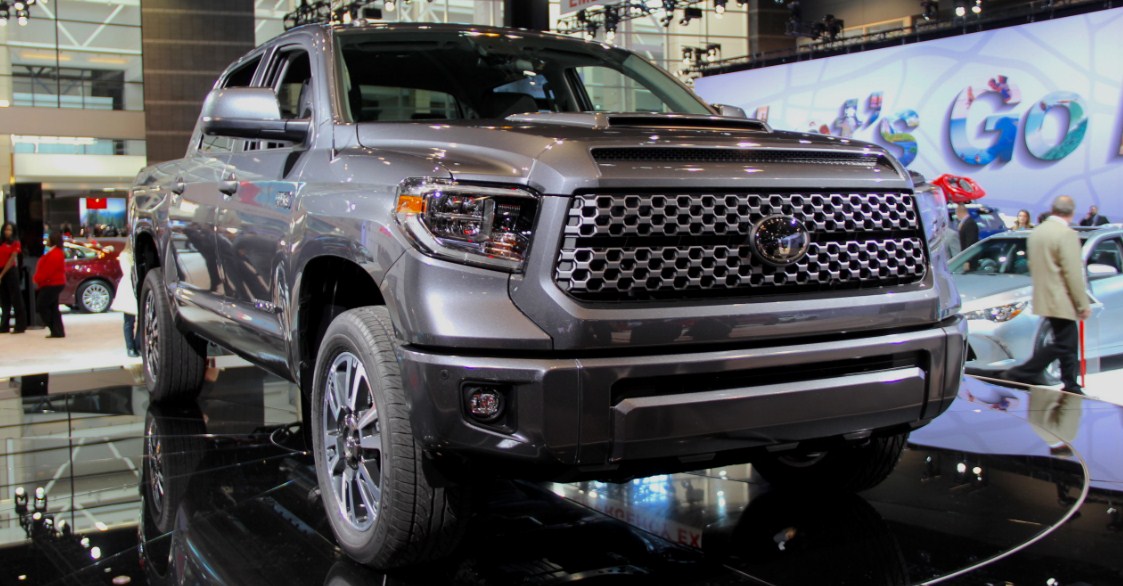 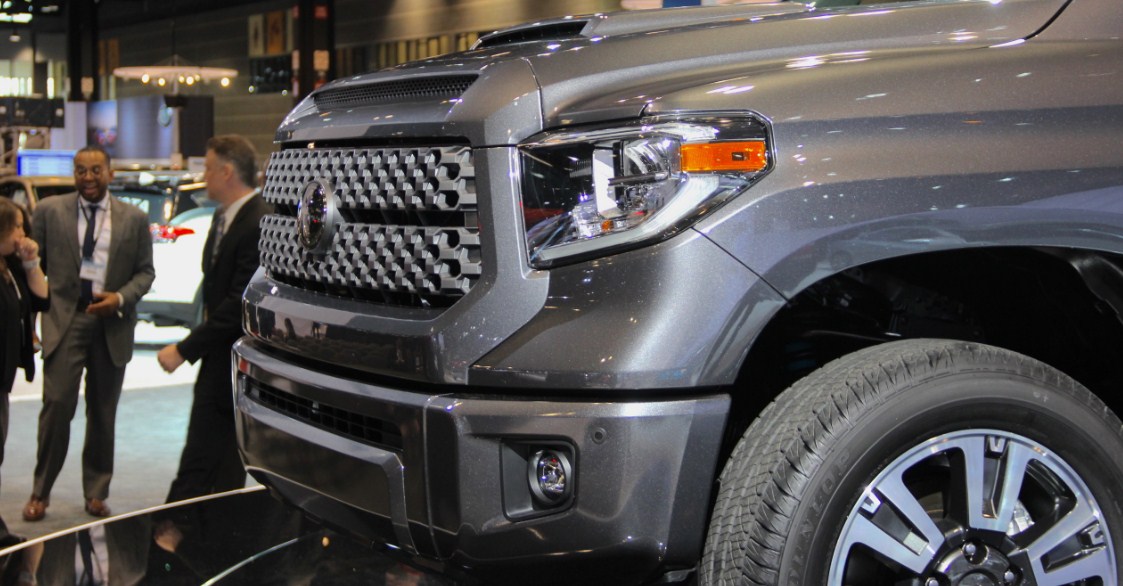 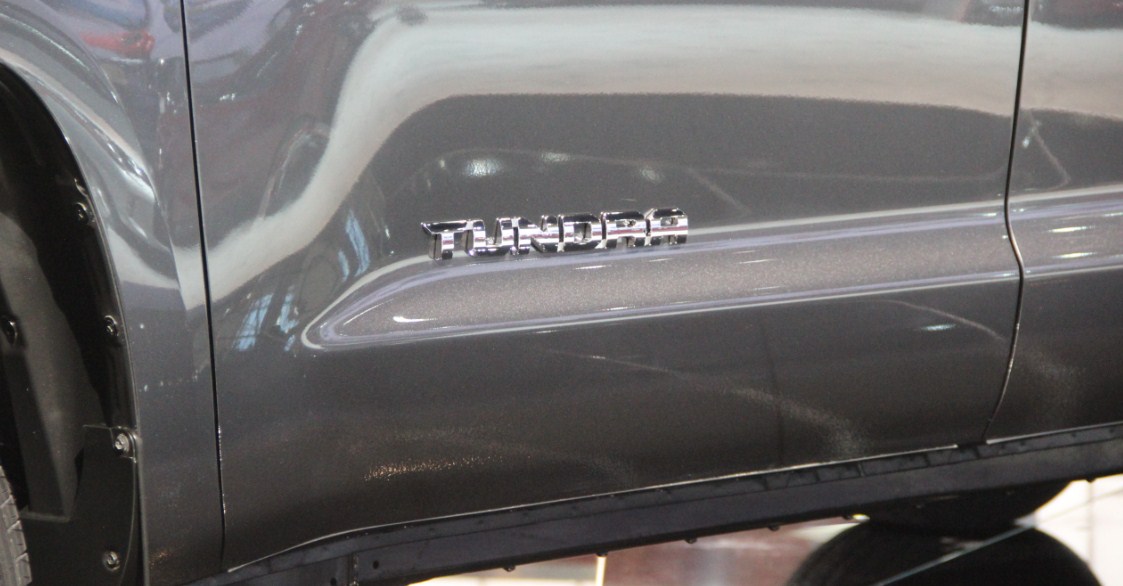 May 31, 2016 / Released a decade ago, the Tundra, despite being a good and nicely finished truck, can’t really keep up with its more current competitors which all feature the newest technologies and engines available on the market. It seems that in order to become a good option to consider Toyota is going to offer an entirely new Tundra sometime in the near future. While so far they haven’t released anything on the upcoming truck, it seems that they are not going to go for an all aluminum build like Ford but they are still going to make some parts out of aluminum, in order to make the 2018 Toyota Tundra Diesel more durable and also lighter.

The frame is likely going to be extensively re-engineered with a lot of new parts which will make for a more structurally rigid truck. This could mean that it will be able to tow a lot more than the current version and it will also be more comfortable. Also, for the first time ever, the truck may receive a rather special engine with the 2018 Toyota Tundra Diesel, a direct competitor for Ford’s future F-150 diesel and the current Ram EcoDiesel.

Unlike these two, though, the Tundra will be more expensive with a starting price close to $55,000 and with a larger towing capacity. Unfortunately, it will not be available for sale until at least 2018 so people looking at a diesel full-size half-a-ton pickup truck can only get the Ram EcoDiesel or the new Nissan Titan xD which is a bit larger.

It seems that for the future generation of the Tundra and specifically for the Tundra Diesel the Japanese company will work with BMW in order to develop a new powertrain for it. At first many thought that the truck would receive the 4.5 liters turbocharged V8 diesel found in the current Land Cruiser, but this engine is quite old and not really up to the task of offering as much power as its competitors. Instead, the Tundra might receive a rather interesting engine choice with a BMW co-developed inline 6 turbocharged diesel which would be based loosely on their 3-liter engines.

However, instead of offering a 3 liter turbocharged inline 6 diesel, which would still make plenty of power, Toyota might offer a larger than the 4-liter version of the same engine with Toyota-made parts. This would likely get a sequential turbocharging system which would allow the rather small diesel to offer close to 400 horsepower and well over 700 lb-ft of torque, a lot more than any of the current diesel engines found on the market. This would easily be able to allow the strengthened Tundra to tow on the excess of 15,000 and it should also be quite a bit more efficient than the older petrol engines currently available on the truck.

There is still no official information on the design scheme the new truck will receive. If we take a close look in the past and how the current version was designed then it is safe to assume that the upcoming 2018 Toyota Tundra Diesel will very likely borrow cues from the newest Tacoma. That will only mean it will receive a more athletic body with more aggressive lines than the current version which will certainly make for a much better truck to look at. Some also suggested that the diesel version of the Tundra will be the most powerful version of it and it may even be offered in a high-performance off-road model as well. The cabin will likely be kept true to the design and feel of the original meaning that it will be one of the best interiors in its class with a big lead over its rivals both in terms of technology and comfort.

It seems that for the future generation of the Tundra and specifically for the 2018 Toyota Tundra Diesel the Japanese company will work with BMW in order to develop a new powertrain for it. At first many thought that the truck would receive the 4.5 liters turbocharged V8 diesel found in the current Land Cruiser, but this engine is quite old and not really up to the task of offering as much power as its competitors.

Tacoma debuted in 1995 as a compact pickup truck. However, it has evolved into …
The current 4Runner has been launched back in 2009 as a mid-size SUV based …
The Highlander is a mid-size seven-seat crossover sold by Toyota ever since 2000. The …