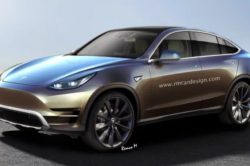 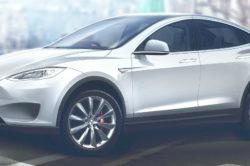 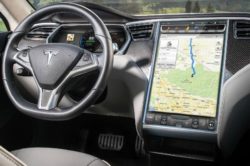 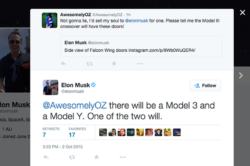 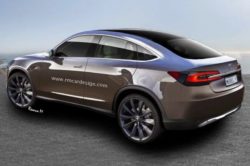 UPDATE Apr 24, 2017 / A while ago it became clear that Elon’s plan is to release an entire range of cars ranging from family sedans all the way to luxury SUVs. At first as a joke, it seemed that Elon wanted the initials of Tesla’s models to form the “S3XY” acronym. Well, later down the road it became clear that this is more than just a joke. Not that long ago Elon Musk stated on Tweeter that the Tesla Model Y update is not that far away. The car is expected to be a medium sized crossover built on the same platform with the unreleased Model 3.

The car is expected to be revealed in an upcoming couple of years. Even though so far there has been very little official information, the Model Y is based on the same skate-like chassis as the Model 3. This means that the only parts needed to be developed from scratch would be the cabin and the interior. The entire drivetrain and running gear would be the same as in the sedan. Thanks to this modular design, the price is not expected to rise much over the Model 3. In fact, the crossover is expected at less than $40,000 for a base model with its premium versions reaching $60,000. The car will more than likely become available once Tesla sorts out the Model 3 production, so roughly 2 to 3 years.

Some time ago Elon started a poll to ask people if they still want the gull-wing doors on the cheaper Model Y. It seems that more than half of them didn’t want this gimmick which is actually good news. If Tesla decided to follow their customers’ desire and replace that design with regular doors, the Model Y would have all it takes to become the best selling electric crossover. In fact, Elon expects to sell north of one million units a year by 2022 which is a huge milestone.

We expect the Tesla Model Y update to reveal that it will boast the same engines as the sedan. This has been the case with its more expensive sibling as well. If this is the case, then expect only all-wheel drive models offering anywhere between 250 horsepower and all the way up to the north of 400 horsepower. The cars are expected to come with identical front and rear electric motors in order to offer the best fuel efficiency. In fact, even with the smallest battery pack, the Model Y is likely going to be able to travel over 200 miles which would make it the perfect electric family hauler.

Jan 6, 2017 / I like to read posts about cars written by other authors, which are published on some other websites. Almost all of them have a comment section where I usually come across interesting questions and opinions. It is kind of an unlimited source of my inspiration. I couldn’t help myself from noticing numerous comments mentioning the famous tweet by Elon Musk he had published several months ago and immediately deleted it. Many wonder whether that was just a typo or not, but the fact it sparkled several different theories. If you don’t know what we are talking about then we recommend you to read the rest of the article.

First of all, Tesla Model Y is not a car, not a concept nor anything else, at least for the broad audience. Tesla Model Y is currently nothing but a rumor. There is absolutely no single information about it. So what’s the fuss about? In October 2015 one gal shared her impression with Falcon Wing doors on her Twitter account. Also, she desperately wanted to know if Tesla Model 3 crossover is going to have these doors.

Elon Musk replied almost immediately: “There will be a Model 3 and a Model Y. One of the two will.” After several minutes he deleted it, but we managed to catch a glimpse of it. Was it a typo or not? Or perhaps that is the name of the next model? We still live in ignorance since Musk hasn’t commented the Tweet.

Although Tesla Model Y hasn’t been confirmed yet, we can assume what characteristics it might have. We can be sure in only one thing, though – it’s going to have Falcon Wings. If you have seen photos of Tesla Model X then you know what I am talking about. They are a new generation of doors which enable easy access to the second and third row. They are totally different than anything you have seen before. Developed by Franz von Holzhausen, these doors might be implemented in all future models, not just Tesla Model Y. Thanks to these doors it is almost impossible to hit your head against the roof. If it appears that Model Y is just a false rumor we will continue to hope Falcon Wings will be used in some other future models.

When you have scarce information about a car it is really difficult to make conclusions about it. However, if we take trends in the car world, Tesla Motors’ tendencies and other models’ aspects into consideration we can get a rough picture about Tesla Model Y. When it comes to the price it should be the easiest aspect to estimate. Tesla Motors is dedicated to manufacturing green cars with zero gas emission at a reasonable price.

To tell you the truth, they didn’t manage to do the last part. However, they are on a good way to achieve it. Their last model costs around $35,000 which is way less than previous two models. If this trend continuous (and it should) then we’ll get even cheaper cars from Tesla Motors factories. This means Tesla Model Y might even cost less than $35,000. We can’t discuss detailed modifications, but we can assume several things. Tesla Model Y should have even better mile range than Model X and Model S. With each model they are trying to increase this aspect and we hope future models will reach 300 miles. Almost every new car came with an innovative feature thus Model Y may surprise us as well.

More than six months have passed since Elon Musk posted that Tweet and we are not a step closer to revealing any detail about the Tesla Model Y. Unfortunately, there is no any data about the release, but we can hope next model produced by Tesla Motors will be launched by the end of 2017.

More than six months have passed since Elon Musk posted that Tweet and we are not a step closer to revealing any detail about the Tesla Model Y. Unfortunately, there is no any data about the release, but we can hope next model produced by Tesla Motors will be launched by the end of 2017.

Tesla Motors has passed a long way since 2008 and the introduction of Tesla …
When the Tesla Roadster was released in 2008, it became the first highway legal …
2019 Tesla Model 3 Hatchback – Although we don’t have official sales date we know …