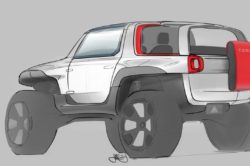 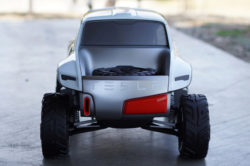 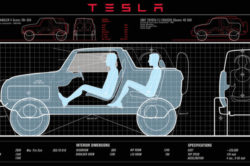 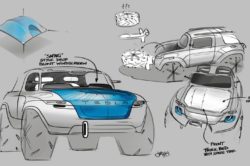 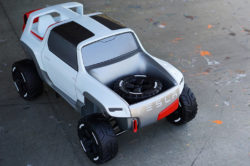 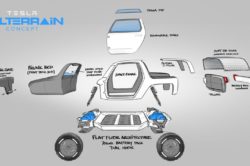 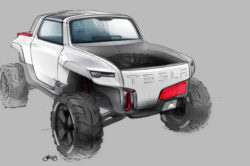 On our website, you can find several articles about the models coming from Tesla. The American automaker released several models and Model S has been the most popular so far. More than 16,000 units were sold solely in the third quarter of 2016. It is ranked the second on the world’s best-selling plug-in list, right after Nissan Leaf. The top-selling country is the United States, but also a significant number of units were sold in Norway. Besides Model S, Model X and Model 3, we also wrote an article about the concept known as Tesla Pickup Truck. This concept is just an unconfirmed rumor and there is one more rumor that is getting more and more attention on the Web – Tesla Allterrain Vehicle. Although it is still uncertain whether it will enter the production, there are some sketches of this model. Here’s our review.

Jason McGinnity probably has never believed that his concept is going to attract so much attention. The graduate of the Art Center College of Design developed this concept as part of the sponsored thesis project. This college is a place where most of the designers  at Tesla studied. Mr. McGinnity won the Interior/Exterior Design Internship at Tesla Motors and this concept was developed during the internship.

Must Read:
Tesla: Company and Models

He spent eight months in total at Tesla and this was his most notable work in this period. However, after he completed the internship he moved to Adidas Future Design in Portland and is no longer an employee of the Tesla Motors. It is such a pity not to have such designer in the car industry because we believe he is able to develop even more intriguing designs. However, we don’t doubt he will be equally successful in the other industries.

Luckily, we managed to get some sketches of the Tesla Allterrain Vehicle hence you can see what this concept looks like. On top of the car telescopic roof rails are placed while some parts are made from stretched waterproof semi-transparent fabric. Roof resembles Wrangler’s roof thus it might be the inspiration for it. The floor is flat and the battery pack is going to be placed in it. Perhaps the coolest feature is removable doors that can be taken out of the frame. These are just sketches thus it is likely more features will be added before it enters production.

Even though the Tesla Allterrain Vehicle is far from being in production there are some performance speculations. A 70kWh battery pack should be placed inside the vehicle which is accompanied with a removable 10kWh battery. According to Mr. McGinnity thanks to these batteries Allterrain will be capable of 220-mile range (354km), all-electric of course. This wouldn’t be the best model coming from Tesla in terms of mile range, but it’s close to the top.
For instance, Model S has a mile range of 400km and is the most efficient electric vehicle at this moment.

The acceleration of the Model S is 5.7 second while the future concept is supposed to go from 0 to 60 in just four seconds. The top speed is estimated at 193 km/h which is great considering this is an all-electric vehicle. Tesla keeps innovating all the time thus don’t be surprised if they announce better battery pack than the current one.

Any discussion about the release date can’t be based on actual information since Tesla still doesn’t know if it is going to launch this vehicle or not. If you see any prediction, have in mind that is just a speculation and nothing more. However, perhaps we can dare to make a price assumption. Considering what the Tesla Allterrain Vehicle offers its price should be placed on prices of Model X and Model 3. This means it will cost more than Model 3 which currently costs around $35,000.