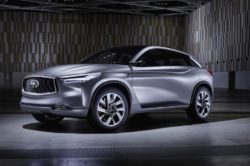 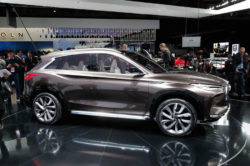 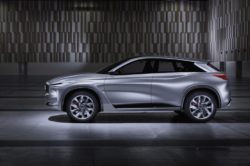 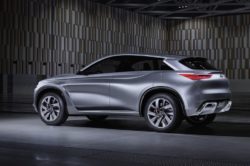 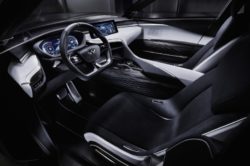 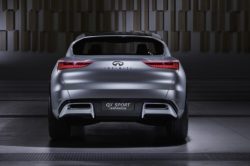 Update Jun 02, 2017: Even though the current QX50 has been around for only a few years, the car was actually released all the way back in 2007 as the Infiniti EX. Since then it didn’t really change all that much which has been quite clear from Infiniti’s sales numbers. However, this is going to change quite soon. Not that long ago Infiniti showcased a concept which many thought it was going to be the new 2018 Infiniti QX50. A few weeks back the car was even spied testing on the open roads, and it seemed pretty close to the original concept in terms of design. Well, a short while ago the patent filings for what appears to be the QX50 have been leaked.

In detail: The car from those patents seems mostly identical to what we have seen on the open roads. It roughly has the same proportions, it looks very similar to Infiniti’s other current cars, and it seems ready for production. Unlike its predecessor, which was rear wheel drive, the new QX50 will be based on the same platform as the Mercedes GLA. This is a front wheel drive platform sporting a transverse front engine. There are advantages and drawbacks to this type of design but more on that later.

Design: Even though the car hasn’t been officially revealed just yet, the QX50 has been pretty much completely exposed by the spy shots and the leaked patent filings. It seems that Infiniti toned down the design of the original concept. The production QX50 appears to get a similar grille to the smaller QX30 and a very similar set of headlights. However, the car is definitely larger, and it doesn’t have the coupe-like roofline as its smaller sibling. The wheelbase looks longer as well, but the car’s front and rear overhangs do seem shorter. That’s why it looks a bit more muscular than its smaller sibling. Not much has been revealed about its interior, but if we had to guess, then we would say the car will more than likely receive a very similar cabin to its smaller brother.

Under the hood: For now, it seems the 2018 Infiniti QX50 will boast a base 2.0 liter turbocharged inline four gas engine. This is definitely a step down from the older car which had a 325 horsepower V6. The smaller engine should still be able to provide around 250 to 270 horsepower which is more than enough for it to be fast. In fact, it seems the engine might feature a variable compression system in which case it would provide considerably better fuel efficiency than its predecessor while not having an impact on its performance.

Review Oct 21, 2016: A couple of years ago Infiniti started to renew their car roster and the first new model was the Q50. This was quite successful in its class and it even managed to outclass some of its more expensive rivals. Because the car was on the right track, two new models followed shortly after. Well, it now seems that they will be releasing yet another new vehicle with the 2018 Infiniti QX50. So far the car has not been official confirmed. However, its concept, the QX Sport Concept Crossover, was shown at the Paris Auto Show a couple of weeks back. The car is following an entirely new design scheme and it seems to be a major improvement over the ongoing model.

So far they haven’t released all that much information about the car. However, even though it seems similar to their smaller models, the future QX50 is more than likely going to use a different platform. The car is expected to be based on a revised rear wheel drive platform that would finally replace the aging Nissan FM chassis. So far not much is known about this but some rumors did suggest at an evolution of the FM. It is quite early to say more about it but we are quite sure we will see the first test mules soon enough. The price is likely going to change a bit, especially when considering the price of the smaller QX30. The car is expected to hit the market sometime in early 2018 with the official unveiling being expected by the end of 2017.

How does it look?

There is no question about the fact that the 2018 Infiniti QX50 looks amazing. The concept has been actually inspired by another one released a few months ago. Since then the design evolved slightly. The lines are now much closer to a production model, the wheels are smaller 21 inches while the already well known Infiniti design cues can be seen. The C-pillar integrates the same type of design found on the Q60. The A-pillars seem to be floating on the concept with the lower part being blacked out. This is an all new design choice and it might be seen on a future production model. Also, even though the car seems to be a larger version of the QX30, there are a lot of unique design cues which really give it a unique flair.

Unfortunately, at this point, it still is early to talk about the interior of the production 2018 Infiniti QX50. However, the concept is quite impressive. For starters, instead of what can be found on all of their other models, the concept features an entirely new design scheme. All the lines flow graciously towards the back of the car and the dashboard now features a driver-oriented design. This might be carried over to the production model in which case Infiniti might have a true competitor for the Q5 and the X3.

So far it seems that the future QX50 is going to feature Infiniti’s new 3 liters twin-turbocharged V6. This engine currently makes between 300 and 400 horsepower and it is one of the most impressive units to drive in this power range. However, we are quite sure that there will be a couple more choices. For starters, in Europe, the car may receive a smaller 2-liter turbocharged petrol engine provided by Mercedes. It is also expected to be their first model to use an all new diesel. This will use variable compression and it should be one of the most efficient combustion engines ever made. Rear or all-wheel drive will be available while an already well known 7 speed automatic will likely be available.