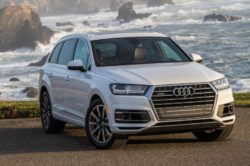 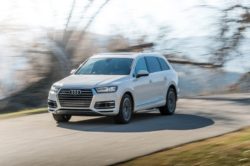 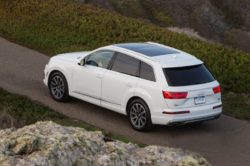 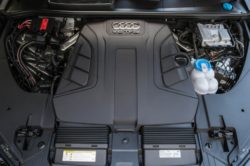 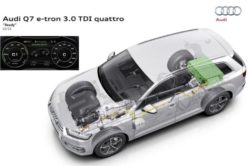 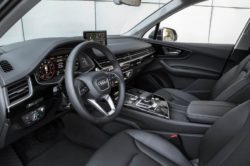 Audi Q7 was the first SUV offered by the German automaker in 2006. The Q7 is a full-size four-wheel drive luxury crossover which is assembled in Bratislava, Slovakia. Besides this one, Audi released two more SUVs: Q5 and Q3. In 2007 Audi sold more than 63,000 units in Europe, US, and Canada. However, sales sharply dropped next year due to the economic crisis and it hasn’t completely recovered so far. The main market is not Europe anymore, but North America, despite a huge competition in the US. With the upcoming 2017 Audi Q7 they are hoping to conquer Europe once again and predictions are promising. The 2017 model is coming with several modifications and you will be absolutely surprised with some of them.

The 2017 Q7 model is a member of the second generation which was unveiled at Frankfurt Motor Show in 2015. This generation brought a new plug-in hybrid, first one after several years. It is offered in three different trims: Premium, Premium Plus, and Prestige. Generally, the price is above the average but you must take everything it offers into consideration. The new model comes with high level of luxury and elegance. You will just love regardless of your age, family and economic status. In this review, we will put powertrain into focus since you can what does it look like in the photos.

Audi chose four different powertrains for the 2017 Audi Q7 and two more which are going to be available at a later date. The base engine is a 2.0-liter TFSI which can generate 252 horsepower and 273 lb-ft of torque. This unit is the first four-cylinder in the Q7 ever. The second gasoline choice is a 3.0-liter six-cylinder and these two are the only gasoline in the lineup. Apart from these two, there are going to be several more options.

A 4.2-liter eight-cylinder used in the previous model is dropped and a 3.0-liter diesel six-cylinder came in its place. The 3.0l comes with an output of 333 hp and 325 lb-ft of torque and it is more powerful than gasoline variants. Thanks to this engine the Audi Q7 can develop 155 mph and it goes from 0-60 mph in 6.1 seconds.

However, the biggest improvement this year is the introduction of the 2017 Audi Q7 e-tron. This is the very first plug-in hybrid which is accompanied by a diesel engine, a 3.0-liter TDI. The diesel unit delivers 258 hp and the electric motor can generate additional 94 kWh. Together they crunch out 373 hp and 516 lb-ft of torque. The combination is mated to an 8-speed Tiptronic transmission. Thanks to this transmission it goes from 0 to 60 mph in just 6 seconds making it the fastest Q7 in the lineup. With the only 1.7l per 60 miles is one of the most efficient BMW vehicles.

The 2017 Audi Q7 is slightly narrower and 1.5 inches shorter than the previous model. The chassis is not a surprise since headlights, bumper and single-frame grille have already been seen on many 2015 models. Front part remained untouched while there were several modifications. Taillights are now narrower than before and exhaust pipes have trapezoidal look.

Even though the 2017 model is shorter and narrower you don’t have that feeling while sitting in the cabin. Head room is actually increased as well as cargo capacity. There are two variants: 5-seat and 7-seat variant. The 7-seat version comes with three rows of seats with foldable last row. Some of the controls have been repositioned in order to enable easier maneuvering.

The biggest competitor is perhaps the second generation of the Porsche Cayenne. The X series can be regarded as the competition as well since these two target the same markets. Current price is slightly under $55,000 but it will surely drop in the following months.

A 4.2-liter eight-cylinder used in the previous model is dropped and a 3.0-liter diesel six-cylinder came in its place. The 3.0l comes with an output of 333 hp and 325 lb-ft of torque and it is more powerful than gasoline variants. Thanks to this engine the Q7 can develop 155 mph and it goes from 0-60 mph in 6.1 seconds.

Previous model of Buick Avista set the world on fire. It came with 3.0-liter …
At the start of 2016 the all new 2017 GMC Acadia has been launched, …
We must admit that we have neglected luxury vehicles and paid more attention to …