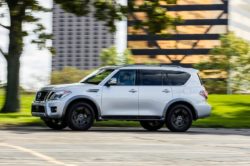 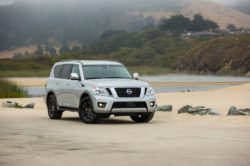 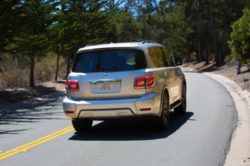 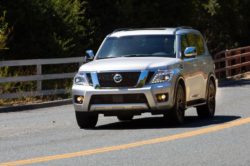 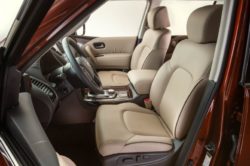 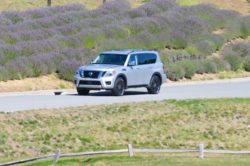 Nissan Armada was launched in 2003 and is based on the F-Alpha platform. It is the same platform used by Titan, Xterra, Frontier and Pathfinder. It was being assembled in Mississippi until 2016 when the production was moved to Yukunashi, Japan. The second generation was designed by Shiro Nakamura and it was announced three years ago. The first member of the new generation is called 2017 Nissan Armada and it is a full-size SUV. It came with plenty of modifications, but it has remained faithful to previous generations. This is our review of the brand-new full-size SUV.

The very first information about the second generation came out in August 2013. It was stated that new models are going to be based on the new generation of Titan. The 2017 model also shares lots of features with Infiniti QX80 and Nissan Patrol such as interior styling. Most of the parts are produced and assembled in Japan while engine comes from the US. It will still be available on the American market as well as in Canada, Mexico, and the Middle East. A night before 2016 Chicago Auto Show Nissan released all necessary information about new model while the official debut happened the next day. It can be found at car dealers and we know every single detail about it.

The 2017 Nissan Armada is going to have a new engine under the hood. Even though it is similar to the previous unit, we saw this engine for the first time a few months ago. A 5.6-liter eight-cylinder uses DIG system. DIG stands for Direct Injection Gas system and it should not just improve fuel economy, but also to decrease CO2 emission. Thanks to a new piston design compression ratio have been increased to 11.2:1. The V8 can deliver 390 hp and 401 lb-ft of torque. The previous model had output at around 320 hp thus this is a significant increase.

The first generation of Armada was coupled to a five-speed automatic transmission while new model got two additional gears. Fuel economy is improved thanks to the new gearbox. It is similar to Infinity QX80 and it is rated at 16 mpg combined. In addition, it is equipped with Downshift Rev Matching and Adaptive Shift Control.

Power is transferred to either two or all four wheels, but it cannot brag with exceptional acceleration. It goes from 0 to 60 mph in 6.7 seconds which is way below the average in this class. Nevertheless, it should meet your demands with a top speed of 120 mph. In conclusion, new engine brought more power, but Nissan still needs to work on the fuel consumption and acceleration.

Every car is unique, new Armada as well, however, it shares lots of features with Patrol and some other vehicles. The 2017 Nissan Armada has integrated side steps, similar grille, upright windshield, and the same D-pillar. However, many things are unique and specially designed for this model, such as a rear tailgate, LED taillights, and many others. There is also optional power liftgate which is standard on Platinum and SL trim levels. New Armada has the top-notch technology and 360-degree Around View Monitor is especially interesting.

The cabin is simply huge. There are three rows of seats and plenty of space for passengers, even in the third row. Headroom is also enormous while the roof is panoramic. HVAC vents are integrated into the ceiling accompanied with dash-mounted vents. All seats are heated and elder people just love them. SiriusXM satellite radio comes with all trims as well as Bose sound system with 12 speakers. Acoustic glass reduces outside noise to a minimum so you can enjoy the ride.

The price of the 2017 Nissan Armada significantly differs from trim to trim. The base trim costs around $45,000 while the price of the Platinum can go up to $55,000.

Power is transferred to either two or all four wheels, but it cannot brag with exceptional acceleration. It goes from 0 to 60 mph in 6.7 seconds which is way below the average in this class. Nevertheless, it should meet your demands with a top speed of 120 mph. In conclusion, new engine brought more power, but Nissan still needs to work on the fuel consumption and acceleration.

On the market since 2008, the Q5 is one of Audi’s oldest models still …
Ever since it was released, the Kia Soul proved itself to be a very …
To tell you the truth there are no many Subaru fans in the US. …