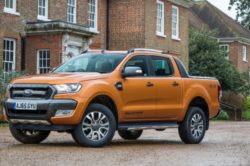 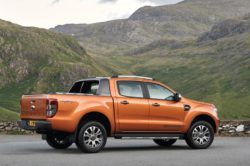 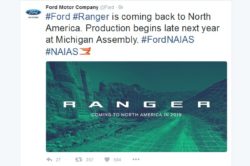 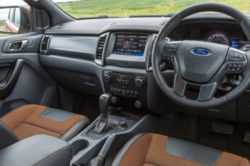 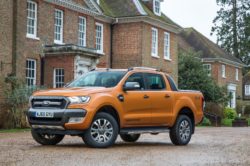 UPDATE Apr 24, 2017 / After not having a medium-size truck on the US market for half a decade Ford finally decides to offer the Ranger once again. However, this time around the upcoming 2019 Ford Ranger is actually going to be based on the International model. On top of that, it will share its running gear and chassis with the Bronco. In order to make all of this possible, they invested in the Michigan plant more than $850 million. Thanks to that there shouldn’t be any availability issues at launch.

So far the upcoming Ranger has been spied in a couple of occasions, but it is not the finished product. In fact, we are positive the development mules seen so far are using the European sheet-metal. The US model will likely differ in design, and it should get different engines as well. However, the chassis and most of the running gear should be roughly the same as the ongoing International version. Not that long ago Ford announced they would start manufacturing the Ranger in 2019. This likely means that the truck will be revealed either later this year or in early 2018. The price is more than likely going to stay under $25,000 for a base version. The top end models are bound to go reach $40,000 or more.

This is expected to be the largest change over the already available International Ranger. Why? Well, the US market prefers boxier and more muscular looking trucks while all the other markets usually like car-like trucks. Because of that, it is safe to assume that the US version will heavily borrow design cues from the larger F-150. Expect in the front a similar grille and set of headlights. However, the belt-line and its rear end are likely going to be shared or at least similar to the current Ranger. The interior is also going to be a rather small change. Here the 2019 Ford Ranger is expected to bring more features as well as better materials than its International counterpart.

To be able to compete in the US the Ranger will have to be powerful and efficient. The base model could be the first US-made truck to boast a turbocharged four-cylinder as its base powertrain. With over 200 horsepower it is also expected to be the most powerful. A larger twin-turbo V6 with north of 300 horsepower, as well as a 3-liter turbodiesel with over 250 horsepower, are also real possibilities. Unlike the larger F-150, the Ranger is likely going to be available with a six-speed manual alongside the already well known ten speed automatic.

UPDATE Nov 01, 2017 / We always try to find some interesting cars to write about, some that are going to be released in the future and even some concepts which might not even be implemented. So what is a hot potato these days? There is one pickup truck which production was interrupted, but there are some rumors that a new model will be released by the end of the decade. It is still one of the most popular pickups in North America. As you have already seen in the title above, we’re talking about 2019 Ford Ranger.

Ford officially confirmed the return of the Ranger in 2019.

Ford’s Joe Hinrichs disclosed at the Detroit Auto Show that the European-market Ford Ranger revealed above, would work as the basis for the U.S. The Ranger offered in North America will be constructed in Ford’s Michigan Assembly Plant, as well as inning accordance with Hinrichs will certainly showcase unique front-end styling, engines, and features as compared with the Euro-market truck.

Name Ranger was used on three different models manufactured by Ford. In 1983 in North America they launched a compact pickup truck under this name which has been available internationally since 1998. Nine years after the original model the second generation was introduced. However, after 29 years Ford decided to discontinue the production in the US. No Ranger has been launched since then, but we heard through the grapevine that new model is going to be released in three years. This whole article is based on rumors and speculations, but we hope most of the things written here will come true.

2019 Ford Ranger should have a unique design, but we believe it will still take after F-150. Perhaps, Ford is going to introduce a completely new grille and new headlights. F-150 has different grille and headlights for different trim levels so this might also be the case with the new Ford Ranger. However, we cannot predict the possible design solutions since Ford hasn’t released any info regarding these features. There is a chance that some trims are going to come with a moonroof. It is a great feature and Ford has already used it in some models, thus it would be nice to see it on the upcoming Ranger.

This pickup truck will be equipped with the latest technology. It’s going to have smartphone integration, Bluetooth connectivity, navigation, satellite radio, voice controls and much more. The cabin might come with some wooden touches, but only higher trims should have this feature. In general, interior won’t have a luxurious look.

It is really difficult to discuss the engine of the vehicle that is going to be released in three years, but let’s give it a shot. Perhaps Ford is going to develop a new unit which will be used under the hood of the 2019 Ford Ranger. We cannot guess what would be characteristics of such engine thus we’ll focus more on the engines that Ford is already using. Our top choices are a 3.2l, an EcoBoost, and a six-cylinder.

The most probable engine is the first one, the 3.2l Power Stroke Inline 5. Cylinder Head of this engine is made of aluminum and it comes with direct injection. It weighs 514 lbs and can deliver 185 horsepower and 350 lb-ft of torque. If it powers Transit, then it won’t have any problem with a Ranger. Apart from this 3.2l, two more units are probably going to be offered. An EcoBoost and a six-cylinder are likely to be placed under the hood of the future Ranger, but unfortunately, we cannot provide more information about them. In our assumption, these engines won’t exceed 300 hp. Both two-wheel and four-wheel drives are expected as well as the 6-speed automatic gearbox.

2019 Ford Ranger should hit the market in approximately three years, but we are not sure exactly when. It might come even earlier if Ford manages to speed things up a little bit. When it comes to costs, the price is being kept off the record. Some sources believe that this pickup truck will cost around $21,000. However, this might be a starting price and higher trim levels will definitely cost several thousand dollars more.

2019 Toyota Supra – We have seen it, and it’s Supra. Test mule, that …
In Europe, the Mondeo is Ford’s flagship sedan so it is also offered in …
At the end of 2014, Ford was releasing the newly updated C-Max for the …