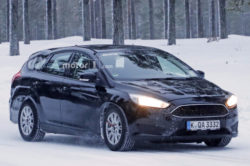 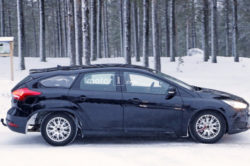 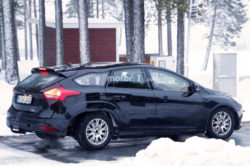 Even though Focus is not at its peak, but Ford still sells over 200,000 units a year making it one of the most beloved cars on the North American market. Sales were going downward spiral in the last few years, but we’re still waiting for the figures from last year. This compact car comes in six body styles and all drive modes meeting everyone’s needs. In this article we decided to write about a test mule spotted on the streets several days ago. The 2019 Ford Focus Wagon is still far from being on the streets but this test mule was enough to draw some conclusions.

There is no much information about the new model. However, these photos can reveal lots of things. The car was spotted several days ago, but have in mind this is not the final solution thus we can expect additional modifications. A test mule actually refers to an existing model equipped with new features and modifications. Since this is only the test mule it means the final model can look very different.

However, in our opinion, Ford might add some additional upgrades and that’s all. Although wagon is on the photos changes we see are probably going to be applied in hatchback and sedan as well. The prototype name of the model is Elvis while the hatchback is named Lemmy (perhaps after late Lemmy Kilmister).

Ford had halted the production of the wagon in 2008 and brought it back four years later. According to the photos, the 2019 Ford Focus Wagon takes after the “LZ” Focus and it shares some features with other Ford cars. Some articles compare it to Frankenstein of the car industry. The first thing you notice is that vehicle is notably longer and wider than the current model. There should be more space inside the vehicle, especially at the back of the car.
Although the development of the model is still in its early stages, we can see Ford is planning to use a beefier front bumper. Rear windows have an irregular shape and they might be changed until the release. A power bulge is placed on the new bonnet. On the other hand, the grille doesn’t seem to be modified. It hasn’t been updated in six years hence it is likely Ford will decide to modify this feature as well. There are no words about the interior so we cannot tell you much about it. Nonetheless, you shouldn’t expect less than the regular Focus offers.

It is quite difficult discussing the interior, but trying to guess what is under the hood of the 2019 Ford Focus Wagon is next to impossible. The third generation of Focus, which 2019 model will be part of, inherited the engine used in Mustang, upgraded, though. A 2.3-liter is part of the lineup as well as 1.5-liter turbocharged four-cylinder. The latter one is equipped with EcoBoost technology and comes in 148-hp and 177-hp variants. It is believed the 2019 model will use the EcoBoost technology but we’re still waiting for the confirmation.

One of the possible engines is a 2.0-liter turbodiesel TDCi. This is a revised engine inherited from the previous generation. It is as powerful as a 148-hp 1.5l. Stay tuned with us since we’re going to write more about Focus engine lineup as soon as new information is released.

Ford is not planning to release all body styles at once. It appears that hatchback will come at some point this year and will be the first one to hit the market. The Ford Focus Wagon 2019 will come after it, probably in 2018. There is a lot of time until the release of the wagon thus who knows what Ford designers can change until then.

2019 Ford Edge– Edgier? Does Ford need an Edge, when it has an Explorer? …
In Europe, the Mondeo is Ford’s flagship sedan so it is also offered in …
The GT500 has been the most powerful Mustang Ford has ever made. However, the …