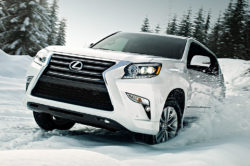 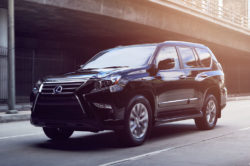 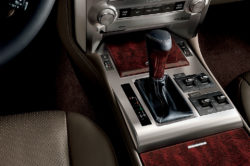 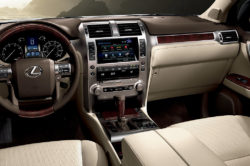 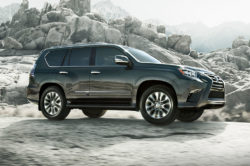 We must admit that we have neglected luxury vehicles and paid more attention to sports cars and all-electric vehicles. They are trendy, but that is not excused. Therefore we decided today to write about the upcoming luxurious 2017 Lexus GX. Photos of this model have released a while ago and we already have enough information to write a decent review. Although it is a luxury vehicle it is also both on-road and off-road vehicle. To tell you the truth it doesn’t actually look like an off-road, but Lexus keeps surprising us.

This is a midsize luxury SUV which can be easily driven on rough terrains thanks to great performances. The design is not the best in the class because it’s a bit boxy for our taste. We prefer to see more curved chassis, but it’s hard to please everyone. On the other hand, we’re absolutely thrilled with what this model is going to get under the hood. All in all 2017 Lexus GX is a modern top-notch midsize SUV with great characteristics. As every other vehicle it has its pros and cons and here are the most important ones.

Lexus doesn’t usually offer more than one engine option and there will be only one unit this time as well. It should meet everyone’s demands even though it cannot brag about the exceptional fuel consumption. A powerful 4.6-liter eight-cylinder is able to deliver 301 hp and 329 pound-feet of torque. The amount of output is great for a midsize SUV and the engine won’t let you down on the road. There is only one transmission (a six-speed automatic) and only all-wheel driving system. The maximum speed is currently unknown, but 0-60 time is estimated at 7.2 seconds. Although this is not among the best in the class it is still decent acceleration.

Thanks to the strong engine 2017 Lexus GX can tow up to 6,500 lbs. Perhaps the biggest drawback is fuel efficiency. Strong engines often require a lot of fuel. GX’s estimated EPA rating is 15 mpg in a city, 20 mpg on highway and 17 mpg combined. This is not bad taking into consideration size of the vehicle, but we hope they can improve it in the future. After all, what luxury car has exceptional fuel efficiency?

First of all color palette is quite wide. It comes in around 10 different colors: Claret Mica, Silver Lining Metallic, Nebula Gray Pearl, Starfire Pearl, etc. As we have already said at the beginning it looks a bit boxy and comes in sharp edges. For the first time, this model comes with grille consisted of four horizontal bars. Headlights will be equipped with LED technology as well as daytime running lights. The suspension is upgraded in order to better adjust the car to rough terrains. All-terrain tires will also contribute to smoother ride during an off-road drive.

Generally, it is few inches longer than the previous model. This results in increased cargo space and there will be more room for passengers. This midsize SUV is equipped with finest materials. Seats are wrapped in leather and come with heating technology. The latest technology is used inside the cabin, but we are not sure whether it is going to have a triple-zone or a dual-zone climate control. Smartphone integration is getting into almost every car as well as Wi-Fi and Bluetooth connection.

Many experts agree that 2017 Lexus GX should be launched in the first half of 2017. However, they do not agree when it comes to price. There are several different price estimations that can be found on the Web. After consultation of few sources we came up with an estimation of $49,000, but don’t get surprised if it costs a couple of dollars more.

There are only a handful of small car manufacturers that design everything in-house. This …
We are getting lots of question regarding Ford Kuga. Is it a trim of …
In a class where cars usually start at over $60,000, the $45,000 XC90 is …