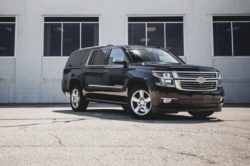 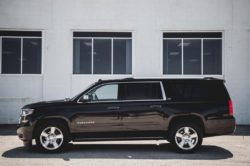 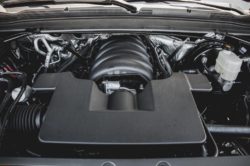 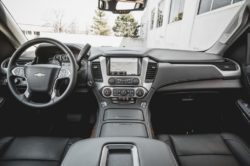 The full-size Suburban received a small update with the 2018MY car a short while ago. While the base version of the SUV remained unchanged, it did receive a new trim level in the form of the 2018 Chevrolet Suburban RST, which stands for Rally Sport Truck. This package will be available not only on the Suburban but also on the shorter Tahoe. The package is meant as a performance upgrade and not just a visual upgrade which is really unusual for a full-size SUV. It comes with a lot of different parts meant to give the Suburban better performance and better driving characteristics. At this point, Chevrolet didn’t release the price of the package. However, considering all the gear it comes with, it is safe to assume it is more than $10,000 for the fully optioned package which would still be well worth the money.

The 2018 Suburban is still the same truck-based SUV as before. However, the RST package adds a lot of features meant to make it better to drive on the road. For starters, the RST package comes with new shocks and springs which are slightly stiffer. These should reduce body-roll to a minimum while giving the driver more feedback. An optional Performance Package, available only for the RST-equipped cars, can also be ordered. This will include GM’s great Magnetic Ride Control system which boasts electrically adjustable shocks. These should make it not only better to drive but also more comfortable than the regular model.

On top of that, the 2018 Chevrolet Suburban RST will also receive a better set of brakes for the front wheels. These will include larger rotors as well as six-piston Brembo calipers. All these upgrades were previously available in GM’s performance parts catalog, but only as individual items and for a much higher price tag than the complete package.

The new Suburban can now be had with two different engines which are quite interesting to see. The base RST version of the SUV will still come with the same 5.3 liters naturally aspirated V8 engine. This is good for 355 horsepower and 383 lb-ft of torque which is quite impressive considering its size and fuel efficiency. The engine will drive either the rear or all four wheels via a six-speed automatic gearbox. With it, the Suburban will hit 60 MPH in 7.1 seconds which is quite good for a car that weighs north of 6,000 pounds.

The big news comes in the form of GM’s 6.2 liters naturally aspirated V8 which features variable valve timings. This engine can be had on the RST as an optional extra through the Performance Package. It provides 420 horsepower and 460 lb-ft of torque which is enough to get the massive Suburban to 60 MPH in less than 6 seconds. On top of that, the tow-rating will be increased to nearly 9,000 pounds. With this new engine, Chevrolet will also install a new ten-speed automatic which should allow the driver a much finer control over the engine.

Not only did the 2018 Chevrolet Suburban RST received more power and a better running gear. The SUV also received a lot of attention on the outside. All the chrome has been removed, so the door handles, and the grille surrounds have been colored coded to the car. On top of that, the RST will be available in four different unique paint schemes including a “Detroit White” which is quite impressive to look at. Chevrolet also added a lot of black accents throughout the car. The mirror caps, the front grille, the badges, the windows’ surrounds as well as the wheels have all been accents or painted in a deep gloss black paint. In order to clear those massive Brembo calipers, GM also installed a new set of 22-inch alloy rims which are wrapped in high-performance summer tires.

2018 Chevrolet Suburban RST Inside the Cabin

Unfortunately, the RST package only includes exterior and performance upgrades. This means the 2018 Chevrolet Suburban still has the same cabin as its predecessor. This is not all that bad though as it still is one of the largest and most comfortable full-size SUVs on the road. On top of that, it comes with plenty of features for this class as well as above-the-average materials which do elevate the experience inside the cabin.