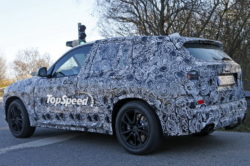 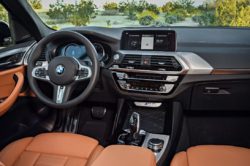 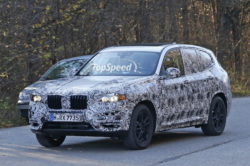 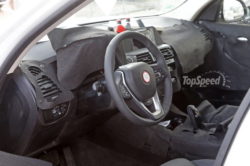 Lexus was the one that initiated whole compact luxury SUV craze close to the end of 90’s. In the mean time, RX grew enough to relocate itself into the higher segment, while astonishing sales figures kept following it. Munich was quickest to react to RX’s success story when it launched X3 in 2003, while other European premium rivals took more time to react. The fact that it was among the first, these days apparently don’t mean anything for X3 as lately it was beaten in sales by Audi, Mercedes and Volvo and in many cases by a significant margin. Plus to that, things are especially tough lately with Jaguar and Alfa joining the game, and their buyers must come from somewhere. Still, Beemer is definitely not giving up the battle, and brand new 2018 BMW X3 has arrived.

New generation’s appearance is an evolution rather than revolution. Some of the predecessor’s sharper approach to design is subdued, primarily with new headlights and tail lights, but now instead we have an extra shot of masculinity and dynamism all over the body. Slimmer lights at the back especially intensify the feeling of improved handsomeness while the shape of front ones could be arguable. They somehow evoke memories on ones used on second generation 1 Series, and that would be those extremely awkward ones that Beemer later managed to sort out during a facelift.

BMW has been pretty good lately in elevating luxury levels with its interiors. New X3 is no exception. Newest 5 Series has been unusually generous to it and let it borrow its steering wheel and basically the dash, leaving us wondering what is going to be left for the new X5. Anyway, mimicking the dashboard of the sedan occupying higher segment is nothing but plus for this compact SUV. There are more pluses. Wheelbase is over two inches longer; tough only boot made a profit of that with one cubic feet more. Finishing with the positive sides, we should note that head up display gain 75 percent more of its surface and new infotainment screen is especially large with 10.3-inches in diameter also now supportive of Apple Car Play and famous Gesture control.

All Wheels or Nothing

New X3 continues with two petrol engine choices in the US, while this time diesel is left behind. The xDrive30i model comes with turbocharged 2.0-liter L4 rated at 248 hp and 258 lb-ft of torque, which points to almost insignificant rise by eight hp, while peak torque fell by two lb-ft. The xDrive M40i model comes with much better revisions as its 3.0-liter turbo L6 pumps out 355 hp and 369 lb-ft of twist, which is increased by remarkable 55 hp and 69 lb-ft. Both units are expectedly paired with perfectly tuned ZF’s 8-speed automatic, but there is plenty of more reasons to go straight for M40i version- launch control, tweaked suspension, swollen fenders, aggressive bumpers, larger exhaust tips, to name the few.

If you read previous sentences carefully, you might be wondering why we mentioned xDrive explicitly with both models since somebody could just skip that option box. Well, not anymore, AWD is now standard and if you mourn for more entertaining RWD, once again go for M40i since torque distribution favors more rear axle here than in weaker sibling. M40i is absolute king, at least until real M arrives, which Beemer finally decided to bring after so many years.

In total 2018 BMW X3 is a nice step forward. The whole thing appears as a complete package, and all is good, but it seems that there is nothing extraordinary about it. That could be a problem in the very packed segment. Yes, it’s pretty, but not as F-Pace, Stelvio or Macan. The cabin is posh, but not as much as one in GLC or maybe even XC60’s one. In the end, lately Beemer’s “ultimate driving machine” phrase better suits Jag’s, Porsche’s and Infiniti’s offer, making things unpleasant for it. Price is expected to rise from current $41k when sales start in November, which definitely doesn’t help either, but still “blue propeller” always had enough of following to keep things lucrative.

Jan 4, 2017 The X3 has been the car that basically started the compact luxury crossover market. Ever since it was released it remained one of the best-selling models and even though more recently this is no longer true, it still is one of the better cars out there. In order to get back on top, an all-new version is going to be released with the 2018 BMW X3. This new car will finally get to use BMW’s brand new CLAR architecture which also underpins the new 7 Series. With it, the X3 will weigh a lot less than before. In fact, some rumors suggested losses of as much as 200 to 300 pounds.

The new platform is not only going to be lighter but it will also be significantly stiffer. This means that the NVH levels will improve considerably and the X3 will become even better to drive than before. Some rumors suggested a while ago that the new X3 will become front wheel drive. This is not true especially since it will use the CLAR architecture which his a rear wheel drive chassis. BMW will also move the car slightly upmarket thanks to the fact they will also release an X2. This will basically fill in the role of the base X3 so BMW will be able to focus on the more powerful and expensive models. Expect the new car to start at over $40,000 and go up to more than $55,000 for the higher end models.

Even though BMW hasn’t actually released any pictures as of now, spy shots of the prototypes have been photographed a few time so far. From these, we can see that the 2018 BMW X3 is slightly longer, wider and lower than before. It also seems to look a lot closer in design to the upcoming X7 with a coupe-influenced design which really makes us think about a sports car. With the new BMW X3 2018, two new models will also hit the market. There will be the X3 M40i which is going to boast a unique exterior with upgraded aerodynamic features. This will also include larger wheels than the standard model, blacked out exterior accents, a roof spoiler and different, front bumper. The X3M, on the other hand, will build up on the M40i but it will get as extras body-colored accents, a different exhaust system, and considerably wider tires.

So far there haven’t been any leaks regarding how the interior of the X3 will look. Despite that, inside sources said that the car will actually borrow parts from the 5 and 7 Series sedans. This is quite interesting, especially since the older model had a lot more in common with the 3 Series. This basically confirms that the car will definitely get more luxurious than before which also means a higher price tag.

The base 2018 BMW X3 is expected to retain the 2 liters turbocharged petrol engine as standard. Most other models will be quite similar in output to the older model. The big news here are the two new models. The M40i should receive a turbocharged 3 liter inline 6 petrol engine with 355 horsepower and over 300 lb-ft of torque. The X3 M, on the other hand, will get a twin-turbocharged engine, most likely the one in the M3. This is known to make around 425 horsepower and over 400 lb-ft of torque. Both of these will more than likely come with BMW’s xDrive as standard and both of them should get an eight-speed automatic as well. While a manual would be fun, it is highly unlikely in a crossover at this price point.

The base 2018 BMW X3 is expected to retain the 2 liters turbocharged petrol engine as standard. Most other models will be quite similar in output to the older model. The big news here are the two new models. The M40i should receive a turbocharged 3 liter inline 6 petrol engine with 355 horsepower and over 300 lb-ft of torque. The X3 M, on the other hand, will get a twin-turbocharged engine, most likely the one in the M3. This is known to make around 425 horsepower and over 400 lb-ft of torque. Both of these will more than likely come with BMW’s xDrive as standard and both of them should get an eight-speed automatic as well. While a manual would be fun, it is highly unlikely in a crossover at this price point.