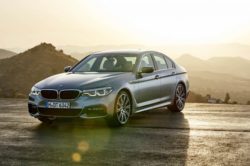 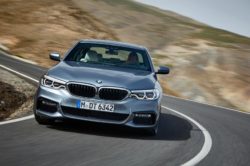 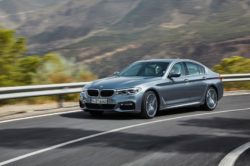 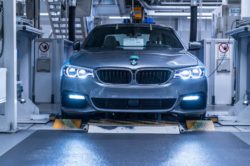 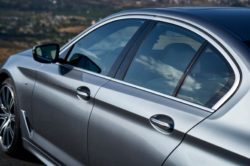 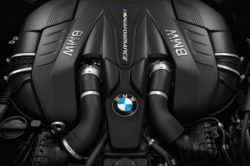 The latest generation of the 5 Series has been revealed back in October and it is their second car to use BMW’s brand new modular car architecture also called CLAR. This is shared with the larger 7 Series but there are some minor differences between the two. For starters, the 2018 BMW 5 Series doesn’t have the carbon reinforced chassis found on the 7 Series. Instead, it uses quite a bit of aluminum and some high strength steel. BMW also added aluminum fenders, a hood, and roof which allow them to save as much as little over 130 pounds over the previous model.

The BMW 5 Series 2018 is very similar in terms of the size of the older model. It is 1.2 inches longer but it is similarly wide and tall and it has a very similar wheelbase too. So far the car has been released in a few different versions. The US market gets two models while the European market adds three more. In the near future, an M version will also be released which will become their new top end model. So far BMW announced that the US version of the car will be slightly more expensive than before. The 530i is going to start at $53,000 while the 540i will up the price to $60,000. This is still well within reason but it is a small increase over the older model. It is worth mentioning though that these prices might change slightly when the car will become available for sale in February 2017.

Instead of looking at their smaller models, BMW took quite a few cues from the larger 7 Series. The 2018 BMW 5 Series get a really upmarket cabin even with the high price tag. The driving position is approaching perfection with a low-mounted seat and great visibility all around the cabin. The dashboard is rather simple with a wide center stack on top of which a large wide LCD screen is mounted. Even though the iDrive system is still present, the LCD now supports touch-based controls, so it should make things a bit easier. The dashboard is still slightly turned towards the driver in order to offer a hassle-free experience. The instrument cluster, unlike in the competition, is still analog which is an interesting choice for sure.

We said that the car is mostly identical to the older model in terms of actual size. However, it doesn’t really look like a 5 Series and that is a bit sad. The 2018 BMW 5 Series is very similar to the smaller 3 Series which is quite old at this point. The front end has the same grille and headlights design which stretch towards the grille. The bumper is quite simple and the rear bumper is nothing special either. On the sides, we can see similar inserts to those found on the 7 Series but these doesn’t really change the fact it looks like a bigger 3 Series.

The US model gets just two engines. The base car has a 2 liter turbocharged inline 4 which is good for 248 horsepower and 258 lb-ft of torque. The 540i gets a 3 liter turbocharged inline 6 with 335 horsepower and 332 lb-ft of torque. These are slightly better than the older units but they do offer significantly better fuel efficiency. The European market gets an additional two diesel engines which offer between 190 and 265 horsepower as well as a large V8 and a hybrid. The latter options are also expected to hit the US market in the near future. Also, a future M model will more than likely boast a revised V8 gas engine with more than 600 horsepower.

The 2018 Toyota Sequoia has just been released but only with minimal changes. Toyota …
The new 2018 Volkswagen Polo GTI is going to feature a lot of improvements …
When talking about Nissan Z models there is always a lot to say, but …