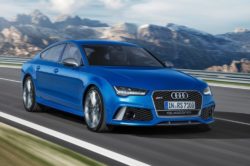 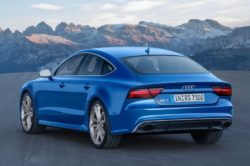 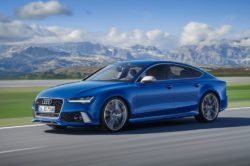 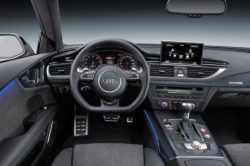 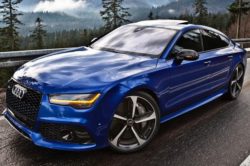 The current A7 has been released back in 2009 in concept form and in the meantime it received a couple of large updates. The latest is the 2017 model which also brings a new version. This is expected to be the last big updated before an all-new model will take over next year. The new model we are talking about is the 2017 Audi RS7 Performance. This has just been released for the US market a few months ago and it is quite an improvement over the regular version. However, while it is new in the US, the European market had the model for quite some time.

What new things does it get?

Well, for starters, the new RS7 comes with more power, a higher price tag and slightly more gear inside the cabin. That’s about it, though! The new model everyone is looking for, the upcoming Audi RS7 2017 based on the MLB Evo is still a couple of years away. While the base RS7 starts at just over $111,000, which is still a massive amount of money for what is basically an A6, the Performance model will set you back $130,000, and that’s for a base model! However, for the price, the RS7 comes with enough power and chassis to straight up outrun any other supercar up until its price point. It also does it in style and relative comfort.

The 2017 Audi RS7 Performance is running the same suspension system as the regular RS7. However, it gets slightly better brakes which are now actively cooled as well as a revised suspension system. This new fully adjustable suspension system is not only lower but it can also fully adjust to the road surface. It is controlled in real-time by a computer and it does change the way the car behaves quite a bit. However, because of it, the new Audi RS7 is not a true luxury car but more of a four-door supercar that happens to be somewhat comfortable.

We have to say that Audi did a great job at keeping the A7, and the high-performance RS7, alive. The front end has been extensively revised and it does look modern. The Performance model gets a new front bumper with active brake cooling ducts, a bigger intake, and a slightly different grille. The wheels are all new as well and so are the available colors. The back is similar to the RS7 but it does get an active exhaust as standard which is otherwise unavailable on the RS7. Unfortunately, the interior is nothing special over a regular A7. It still has the same driving position, equipment, and materials as the lesser cars. The seats are the only notable upgrade being modular and wrapped in Alcantara. Unfortunately, Audi’s great electronic instrument cluster can’t be had with the RS7 because it is too old.

The 2017 Audi RS7 Performance boasts the same 4 liters twin-turbocharged V8 as the regular RS7. However, it receives a boost to 605 horsepower and 553 lb-ft of torque which is more than the engine on the new Panamera. Unfortunately, it is not the same new Hot-Vee design as the Porsche but an older unit which is still very capable. The Performance has little to no lag at all and the ZF-eight speed automatic has been tuned to perfection. The car gets their “Quattro” all-wheel drive as standard as well which allows a 0 to 60 MPH time of 3.3 seconds despite weighing more than 4,500 pounds. The top speed for the Performance model is actually limited to 190 MPH but rumors say it will easily go past 200 MPH if given the chance.

A couple of months ago GM released the all new 2017 Chevrolet Camaro ZL1 …
The Alfieri has been first showcased nearly two years ago. The car was a …
There are only a handful of small car manufacturers that design everything in-house. This …