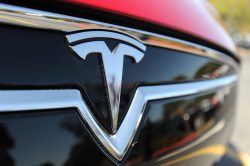 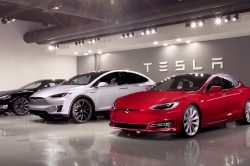 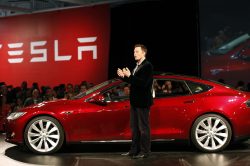 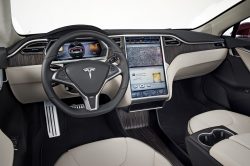 When the Tesla Roadster was released in 2008, it became the first highway legal serial production all-electric car with lithium-ion battery cells and the first production all-electric car to travel more than 320 kilometers (200 mi) per charge. Ten years later, in 2018, Tesla ranked as the world’s best selling plug-in passenger car manufacturer, after having delivered over 245,000 units.

To the car aficionado, Tesla Inc is of course chiefly known for its high-end electric cars, but this company is also – through its subsidiary SolarCity – a trailblazer in the field of solar panel development and manufacturing, including solar roof tiles. Naturally, the two fields tie into each other since the electricity generated by solar panels can be used to charge car batteries.

The company – then known as Tesla Motors, Inc. – was founded in 2003 by the engineers Martin Eberhard and Marc Tarpenning, who named their creation after the groundbreaking physicist Nikola Tesla. (In 2017, the company name was shortened to just Tesla, Inc.) The current CEO Elon Musk joined the company very early, during the Series A funding, together with J.B. Straubel (current CTO) and Ian Wright. Today, all five men are considered co-founders of the company.

Unsurprisingly, this innovative automotive and energy storage company has garnered a lot of investor interest ever since its early days. It has made it onto the list of the most recommend stocks on the social trading platform eToro on several occasions.

It is a publicly traded company, which means that it is fairly simple to buy shares in this corporation. The shares are listed on NASDAQ where they are traded using the symbol TSLA.

The ISIN code for the Tesla shares is US88160R1014. ISIN is an International Securities Identification Number that uniquely identifies fungible security.

Tesla, Inc. is based in Palo Alto, California, USA.

If you don’t want to invest directly in Tesla Inc, but still want some exposure to the stock, you can go for an ETF with a significant TSLA holding. An ETF is an Exchange Traded Fund, which means that buying and selling fund units is easy and straight forward since they are traded on an exchange.

Examples of NASDAQ listed ETFs known to have TSLA as a Top 10 holding:

Since the exact content of an ETF can change, it is important that you do your own research before you make any purchase decision. The ETFs listed above have TSLA as a top-ten holding at the time of writing, but it is strongly advisable to research any ETF well right before the purchase to obtain current information. Also, check the investment strategy for the ETF.

Tesla Motors has passed a long way since 2008 and the introduction of Tesla …
On our website, you can find several articles about the models coming from Tesla. …
Ever since Tesla released the Model S many people were left wondering if such …