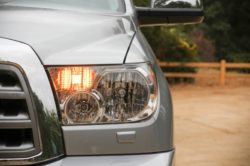 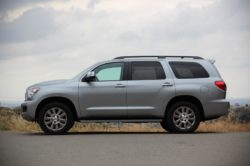 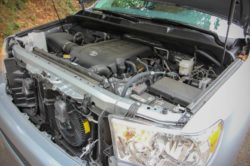 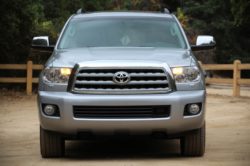 Do you know what the largest SUV on the North American market is? It is really difficult to tell which one stands above others, but there is one candidate for the throne. It is coming from Toyota and definitely deserves its name – Sequoia. Sequoia is a full-size SUV which was launched in 2000. Although it is made by the Japanese manufacturer, it is assembled in Princeton, Indiana. It takes after Tundra and shares many features with it. This is the second generation of this SUV and it is getting a new member – 2017 Toyota Sequoia.

In 2008 Sequoia got a major overhaul. The second generation was introduced back then and that was the last time it got some important update. If we are not going to see the third generation then were hoping to see at least some modifications. And it appears they lend an ear to us. Even though there won’t be anything revolutionary, it is going to have some visible changes. As every other vehicle, it has some minor flaws, but they can be neglected.

The previous model had a 4.6l eight-cylinder under the hood. It could generate 310 hp and 327 lb-ft of torque. However, it seems that 2017 Toyota Sequoia is going to get a huge update in terms of engine. Allegedly, a 5.7l eight-cylinder iForce will come as a replacement. This engine is a real beast since it can deliver 381 hp and 401 lb-ft of torque. This is really a great news, but don’t take this to the bank. Toyota still needs to confirm what engine it is going to place in new Sequoia.

The 5.7l should come with several improvements. In order to improve its efficiency, Toyota is going to use Acoustic Control Induction System. In addition, there is a dual-independent VVT-i. This system enables better fuel economy. EPA rating of this unit is still unknown, but it will definitely be better than last year. One of the biggest advantages of this car is towing capacity. 2016 model can tow up to 7,400 lbs, but its successor might be able to tow even more. It may even reach 8,000 lbs. It is most likely that it will be paired with six-speed automatic gearbox without a manual transmission as an option.

Exterior is getting some minor touches. Grille consists of two horizontal bars and there is a Toyota logo in the center of it. Headlights won’t have a special design, but they are going to be equipped with LED technology. According to the pictures, rear part remain untouched. Generally, it has good aerodynamics for the car this size. 2017 Toyota Sequoia comes in several different trim levels and each one has a different package. For instance, with a Platinum package you are getting everything that Limited has.

When you take a look at the cabin you will notice a huge space. Eight people can easily fit in three rows of seats. If you have a large family then this is the perfect car for you. Rear seats can be folded as in the previous model and you can get lots of space at the back. Perhaps, you will be able even to sleep in there. We tried to find information about any potential change in terms of technology, but we didn’t find anything. Perhaps, Toyota is keeping this of record and it might come with some minor updates.

In 2008 Sequoia got a major overhaul. The second generation was introduced back then and that was the last time it got some important update. If we are not going to see the third generation then were hoping to see at least some modifications.

Despite the fact the first generation of the Supra was nothing more than a …
The Alfieri has been first showcased nearly two years ago. The car was a …
In the past, the name of BMW’s cars represented the displacement of their engines. …