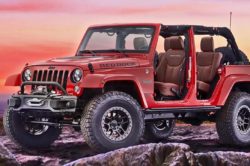 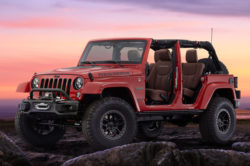 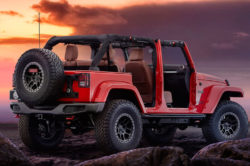 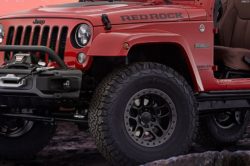 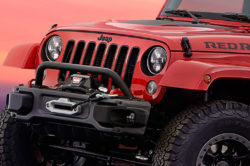 It is hard to tell which car manufacturer is a leader in the field of off-road vehicles. There are several potential high-fliers and Jeep is surely among them. The most popular off-road vehicle is Jeep Wrangler. Wrangler is becoming more and more popular every year since it always comes with some innovative features. Last year at the Las Vegas Auto Show Jeep introduced the new concept of Wrangler – 2017 Jeep Wrangler Red Rock. It is named after one club which inspired its creators.

You may be asking yourself why 2017 Jeep Wrangler Red Rock is a whole new concept. Why isn’t this just a trim of the Wrangler? Well, when you take a closer look at the photos you will realize why Jeep decided to launch Red Rock as a totally new concept. Differences are everything but subtle. It is based on four-door Wrangler but there are no doors. Not a single one. This means you will have a feeling it is more spacious than it actually is. However, you need to extra careful when you have a ride in it and mustn’t forget to fasten your seatbelt.

Jeep Wrangler Red Rock shares lots of details with Wrangler Unlimited, especially with Rubicon Hard Rock trim. Currently, this is the top trim in the Wrangler family. However, Red Rock comes with a vented bonnet, a feature that Rubicon Hard Rock trim doesn’t have. Tires are adjusted to all kinds of terrains which comes in handy on rough terrains. There is even a spare tire at the back of the vehicle. Both headlamps and fog lamps are going to use LED technology. Other than that, there shouldn’t be any other major distinctions from Rubicon Hard Rock.

Since Jeep Wrangler Red Rock comes roofless and doorless we may say it doesn’t have an interior. Joking apart, Red Rock concept is equipped with brown leather upholstery with a special badge and engraved “Red Rock” on them. In general, look neither fancy nor high-tech, but it should deliver the goods. At this moment we don’t have any info about the technology used in the Red Rock. However, it might not be different than the one used in the Unlimited. We expect that changes will be only in design and if you scratch under the surface you will see the very same car.

Basically, you can create your own 2017 Jeep Wrangler Red Rock based on the Wrangler Unlimited. You can just order stuff from Moper catalog and attach them to the car. This means that there won’t be any additional powertrain for the Red Rock. Although new concepts usually have a special engine lineup, this time, this is not the case. A 3.6l six-cylinder is going to be placed under the hood. It comes with an output of 285 horsepower which is quite enough for a vehicle this size and weight.
Estimated maximum speed is 125 mph which is great considering this is an off-road car. Jeep Wrangler Red Rock is a lightweight vehicle so it may go from 0-60 mph in just 6 seconds. There will be two possible transmissions, 5-speed automatic and 6-speed manual gearbox. In order to get the most out of Red Rock, you need to opt for a manual transmission.

Jeep Wrangler Red Rock Concept is definitely entering production lines and it won’t stay just a concept. Allegedly it will hit the market by the end of 2017. When it comes to price there is no reliable data, but the price can easily be estimated. Since it resembles the Unlimited and comes with several improvements and modifications, we may assume it is going to cost slightly more than a regular Wrangler.

Previous model of Buick Avista set the world on fire. It came with 3.0-liter …
If you put close attention to Geneva Auto Show held this year, you will …
On the market since 2008, the Q5 is one of Audi’s oldest models still …