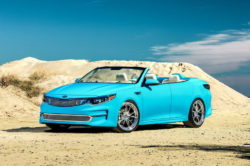 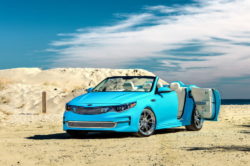 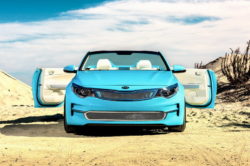 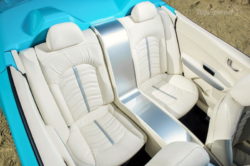 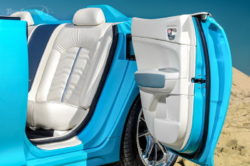 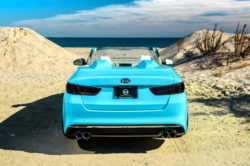 Although you might not live in the US you probably heard of the Route 66. However, have you ever heard of the A1A? It is not as famous as Route 66, but in our opinion, it is much more beautiful. A1A is the highway that stretches along the east coast of Florida. All along the way, there are green forests and cities on one side, and white-sand beaches and perfectly blue sea on the other. Anyway, we are not talking about the road today, but about a car which is named after this highway – Kia Optima A1A.

What is the connection between Kia and A1A, you may ask yourself? Well, people at Kia wanted to pay tribute to this road and create a car which would resemble this highway. As a result, we have a blue-and-white vehicle which appeared under the name of Kia A1A Optima. This convertible was presented at the SEMA Show in Las Vegas last year. Some articles called it “A rappers’ heaven”. It is a typical specially modified American style cabriolet with hinges at the back. The A1A has some innovative stuff, but let’s scratch the surface first.

Even though Kia A1A Optima  was presented over nine months ago we didn’t have reliable info about the engine until recently. The lineup is quite interesting. It will be equipped with Optima’s regular 2.0l turbocharged four-cylinder. Thanks to this engine the A1A should be able to develop 245 horsepower. The output seems just perfect for this kind of engine and it doesn’t need to be more powerful. We’re still waiting for the information about the torque and towing capacity so stay tuned with us.
On the other hand, there are rumors that LUX Motorwerks is going to upgrade a 2.4l naturally aspirated engine. Allegedly such engine could produce additional 60 horsepower. However, the output is not a problem here. Although Kia A1A resembles a fast sports car, it is actually not that fast. With a top speed of 130 mph and 0-60 mph acceleration of 6 seconds, it cannot show off. We are not exactly sure why a car with such output cannot develop better top speed and acceleration, but the answer may lay in its weight. Nevertheless, we are sure that A1A won’t let you down.

The best aspect of this convertible is its design. The color scheme is staggering, but many complain about side skirts that they are too boring. Nonetheless, it looks quite modern and fancy in general. Rear bumpers are new as well as the front one. The coolest thing (besides the fact it is roofless) is rear-hinged doors which you don’t see every day. Side skirts are also new while Kia opted for a 20-inch wheelbase. The Kia Optima A1A seems as a perfectly designed car for summer and beaches.


Interior is not less impressive than the outer part. White leather seats nicely match the blue exterior. They seem quite convenient and there are totally four of them. The whole dashboard remained black. It is equipped with climate and radio controls among other features. Technology seems decent. It is not top-notch, but there should be no complaints about it. On the other side, many would tell “It’s Kia!” Although you might not be a Kia fan you can give a chance to the Kia Optima A1A.

We had a chance to see the Kia A1A in Las Vegas last year, but it still hasn’t come to the market. Unfortunately, we don’t have a clue when that is going to happen. Price is also one of the unknown aspects. Kia didn’t release any detail regarding the price thus we cannot even estimate how much it is going to cost.

Kia Optima is a four-door and five-door sedan which is sold all over the …
Earlier this year the 2018 Kia Telluride has been showcased as a concept car. …
Kia is launching a totally new vehicle! It was spotted on the streets in …