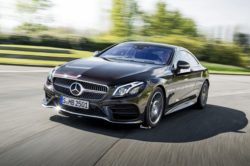 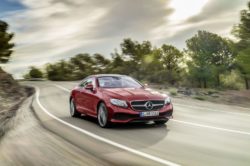 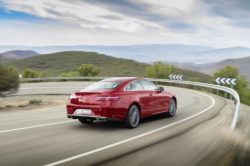 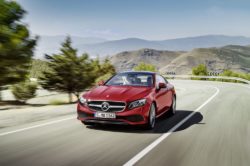 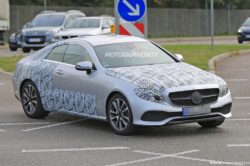 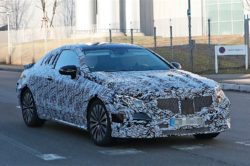 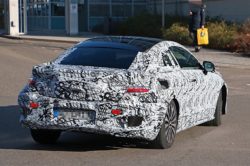 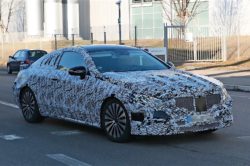 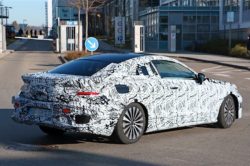 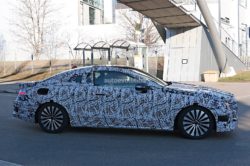 UPDATE – Dec 14, 2016.  When you have tough competition like BMW and Audi certainly are, you always need to improve and try to cover all ends of the market. Mercedes-Benz is doing exactly this and with its new 2018 Mercedes E Class Coupe, they have succeeded in covering one more market segment. After S-Class Convertible and S-Class Coupe Mercedes has created E-Class Coupe a few years ago and now they have improved it ’a little’. Sitting in between S-Clas and C-Class, E-Clas Coupe is just a perfect match for you if you want modern, elegant and luxury German car. The unveiling of the new E-Clas Coupe happened just a few days ago and now we present you with an update.

Compared to the previous model 2018 E-Class Coupe is larger and has wider wheelbase but it is at the same time a little lighter thanks to the new platform. It also offers more room on the inside for the people on the back seats. Interior is like you can expect of a luxurious Mercedes; a combination of wood, leather, and aluminum depending on which trim you select. The infotainment system posses the highest quality and standard Mercedes controls are spiced with a 12.3-inch touchscreen display.

The US market will get 2018 Mercedes E-Class Coupe in E400 and E400 4Matic models. These cars will both boast and amazing 3.0-liter biturbo V6 with the ability to produce 329 horsepower and 453 lb-ft of torque. The 4Matic version, all wheel drive, by the way, goes 0-60 in 5.5 seconds while the standard E400, power transmitted only on rear wheels, beats that time with a score of 5.2 seconds. The thing that both E-Class coupes have in common is the 9G-Tronic 9-speed automatic transmission. Additional equipment consists of all new Mercedes’s Drive Pilot driver assistance which presented itself superbly on E-Class sedan.

The photos that we have presented to you today are official photos released by Mercedes but the public debut has not happened. This is not a reason to be worried because Mercedes have scheduled a presentation of its 2018 Mercedes E-Class Coupe. New E-Class will have its night of glory at the 2017 Detroit Auto Show in January. Sales will start on a later date most likely in the summer of the same year.

Pricing could be expected to be made public shortly after NAIAS. For those that are fans of tuned Mercedes products, AMG version of 2018 E-Class Coupe will be presented on an AMG event which will celebrate its 50th anniversary. Most of the AMG enthusiast hope for E43 AMG and E63 AMG Coupe models.

Since Mercedes launched the first E class vehicle in 1993, very few cars have been able to achieve the fame E class automobiles have. Each new model brought improvements in design and better engines. For more than two decades these vehicles have been among the most appreciated in the world, and owning one of these vehicles is a thing of prestige. 2018 Mercedes E class Coupe continues a two-decade-long tradition of producing a state of the art vehicles which set the industry standards.

The current E class vehicles are utilizing V8 engines, but the rumors say that 2018 Mercedes E class Coupe will also be available with four and six-cylinder gasoline and diesel engines. It is most likely that the base model will come with 4 liter V8 engine with 600 horsepower. This model should have a nine-speed automatic transmission, but it remains unclear whether or not a model with a manual transmission will be available. We are looking at a fuel efficient engine with great power, which comes as no surprise given the strength of engines on previous E-class models.

Volkswagen announced that the future of the car industry lies in the electrification of …
With sales of almost 350,000 units in 2015 Honda CR-V is one of the …
The latest generation of the 5 Series has been revealed back in October and …