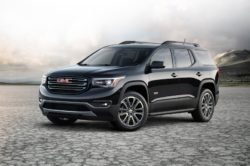 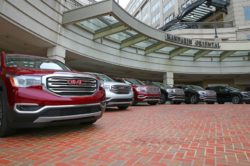 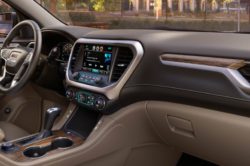 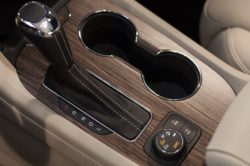 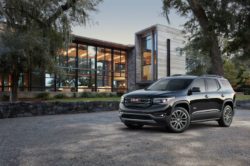 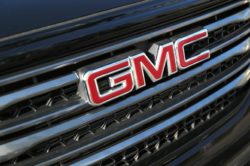 At the start of 2016 the all new 2017 GMC Acadia has been launched, a car which has nothing in common with its predecessor and that’s a very good thing. We are thrilled about the new model because it is a far superior car than the older generation. It also looks better, it is more efficient and quite a bit more comfortable. There are no real downsides to it and we are now going to take a closer look at it to see why. Starting with one of the most important aspects of a car like it, the price has dropped to less than $30,000 for a base model.

This is especially good when we consider that some cars in its class cost well above $35,000. Also, the Acadia is using an entirely new chassis. This is also used by the Cadillac XT5, so it is quite clear where this is going. GM managed to shave more than 400 pounds from the Acadia and the chassis allowed them to build a more comfortable machine. Also, the weight loss means less fuel used by the engine, a better ride quality, and the stiffer chassis means that the NVH levels have been far improved.

Probably the most important aspect of a car like the 2017 GMC Acadia is the interior space and we are glad to announce that it is larger than before. On top of being larger, space has been better divided. This means that all the passengers can now sit comfortable, the trunk is quite a bit larger than before and all the areas of the car are easier to access.

Some said that GMC would not be able to make a good interior after some of their mishaps in the past. Well, the Acadia is not only larger but the interior is far better. We would go as far as saying that it rivals some of its more expensive competitors. The dashboard is covered in soft materials, the seats are comfortable and the driving position is great.

It also comes with plenty of standard safety and infotainment features which were previously offered as options. As a first in its class, the Acadia also comes with an alert system that will make the driver check the rear seats to see if children are there. This is after in the US there have been many casualties of heat strokes in kids left in unsupervised cars.

While still familiar to those who previously seen an Acadia, the design has been greatly improved. Only the profile of the 2017 GMC Acadia is remotely similar to the older model. Besides that, the front end has been revised with GMC’s new grille design. It also gets a more modern looking exterior with curvier lines which make for a more muscular looking machine.

To go well with the more muscular design, the new Acadia also received two all new engines. For the first time in the model’s life, the base car now gets a 2.5 liter naturally aspirated inline 4. This is because many people don’t really need more and it still offers plenty of juice with its 194 horsepower and 190 lb-ft of torque. For those still looking for more GM is still offering a 3.6 liter direct injected V6 with 310 horsepower and 271 lb-ft of torque.

This is more than capable of getting the Acadia to 60 MPH in less than 6 seconds and it should be good for towing more than 5,000 pounds. Front wheel drive is offered as standard on both models and as a rather nice surprise, the all-wheel-drive system is also available on both. Unfortunately, GM’s 9-speed automatic is unavailable here and instead a 6-speed automatic is the only offering.

I can bet when you saw the title most of you thought – BR-V? …
The MKS was Lincoln’s previous flagship sedan but they decided to discontinue the model …
Have you heard of 2017 Jaguar XE? If you haven’t heard about it so …