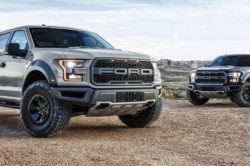 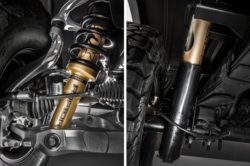 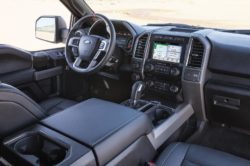 Ford managed to secure a unique part of the market when they released the previous generation of the Raptor which provided all the off-road prowess of a custom built truck without having to deal with any of its disadvantages and because it managed to become one of the best-selling specialty vehicles on the US market, the truck will receive a second generation with the 2017 Ford Raptor which will be better, more powerful and even agiler than before. All of these are the traits people look at the Raptor when they buy one and Ford are not going to discontinue one of their current icons.

Just like with the previous model, the new generation of the Raptor will still be based on the F-150 chassis and body but this time around instead of going for the larger engine in the F-250 Ford is going to outfit the Raptor with a unique engine specifically developed for it. The price still hasn’t been announced but most sources suggest that the truck will cost around $50,000 which would be more than before but still a lot better than a custom built truck. The truck has been released for around a year now but it still isn’t available for sale and some of the details about it are still unknown mostly because Ford wants to further improve its power-train.

Unlike the previous model which was only offered in a Super-Cab version, a couple of months ago Ford announced that the production 2017 Ford Raptor is also going to be offered in a Super-Crew version which will not be much heavier than the smaller truck but it will be longer than it and it should provide better stability during high-speed desert running.

Both models are going to be nearly identical inside the cabin where the only differences between them will be the back seats and the total amount of space available for passengers. Both of them will feature unique Recaro sports seats and a unique leather wrapped steering wheel with a red strip to mark the center. Besides that, the trucks will be mostly identical to the normal versions of the F-150 with another minor exception for the extra blank buttons mounted on the roof that will allow the buyer to route additional lights and accessories.

While much first thought it may look a bit too much like a cartoon character, the all new Raptor quickly managed to become a fan favorite and it has been voted a few times as one of the best looking trucks on the market. While the cabin is identical to the regular F-150, the front end is all new and features a more aggressive and larger grille, new headlights and steel bumpers in the front and at the back. It also gets 17-inch aluminum rims wrapped in 35 inches all terrain tires, unique Fox racing shocks with external reservoirs and internal bypass valves as well as larger than usual Brembo brakes, all meant to make the Raptor a beast in off-road.

Instead of the old 6.2 liter V8, the 2017 Ford Raptor is now featuring an all aluminum 3.5 liters twin-turbocharged V6 which is said to make more power and torque than its predecessor. This means it will likely provide over 450 horsepower and 450 lb-ft of torque which together with the 500 pounds of lost weight should make the new Raptor quite a bit faster than the older model as well as a lot more efficient.

The only transmission offered is going to be a 10-speed automatic which will also be made available on the regular trucks after the Raptor will be offered to the general public sometime at the end of 2016 or in early 2017.

The Eldorado name has been in Cadillac’s portfolio for nearly 50 years but back …
In the past, the name of BMW’s cars represented the displacement of their engines. …
First showcased back in 2013 and officially unveiled in 2014, the new Escalade is …