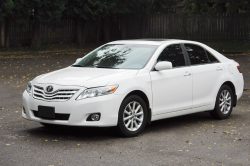 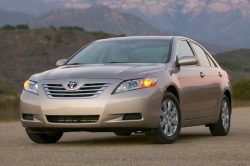 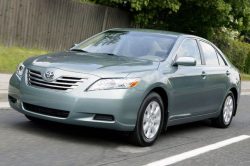 The Toyota Camry has been the best-selling car in the U.S. since it was first released here in 1987. Although the Camry is consistently praised for its reliability, the need for repairs does arise on occasion. These are the most common Toyota Camry issues that have owners searching for “car parts near me,” based on data from the CarComplaints.com database.

Camry model years from 2007 to 2009 sometimes have an issue that leads to excessive oil use. The oil burning issue is attributed to defective piston rings. Often, owners find their cars run out of oil when they are only halfway to the next recommended oil change. Some cases, which typically arise before 100,000 miles, require the engine to be rebuilt or replaced. A class action lawsuit about this issue was settled by Toyota in 2014.

As a car owner, you might expect to search for “car battery near me” once in a while, but you don’t expect your dashboard to melt. According to Autozone, Hundreds of 2007, 2008 and 2009 Camry owners experienced just that, however. This issue typically arose around 96,000 miles and required a complete dashboard replacement.

For the melting dashboard warranty, Toyota says it will have two kinds of coverage. Primary coverage will offer warranty extensions for all Toyota owners that are affected.  There is also the secondary coverage which will work as primary coverage supplement for some owners by offering a ten-year extension coverage from the first date that the vehicle was used.

Many 2007 Toyota Camry owners reported a defective sun visor. This small but necessary part required replacement around 86,000 miles.2007-2011 Models of Toyota with the sun visor were later recalled because of the defect within the plastic body. The visor’s double halves connecting near the lever arm start pulling away from the arm on the car’s interior. This defect causes the arm to be useless in holding the visor in place and increases the risk of driver obstruction

The 2007 Camry also experiences issues with the anti-lock brake system (ABS) that cause the brake light to illuminate around 100,000 miles. This issue requires the replacement of the ABS actuator. In some cases, the brake booster or calipers had to be replaced at about 88,000 miles. Other 2007 Camry drivers needed new brake pads and replacement of warped rotors at about 35,000 miles.

Many owners of the 2011 Camry report worn and chipping paint. This issue tends to arise before 30,000 miles and may require repainting the entire vehicle. One of the common causes of chipping paint is stone chips that fly up from the road and land on the Camry’s bodywork. To fix this issue, get professional help from reliable resources which restore the original color of your Camry. If you want a flawless finish, ensure that you get a complete respray.

When you have these or other issues with your Toyota Camry, visit a qualified auto technician. He or she can get your vehicle back in optimal working condition.